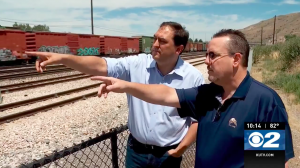 TCU Carmen National Representative Kevin Loftin was interviewed throughout the program, and highlighted the importance of having adequate manpower to properly inspect and maintain locomotives and cars coming through the yards, as well as the impossible time constraints being placed on our members.

The program heavily cites the recent testimony of IAM District 19’s Andrew Sandberg, which was jointly written by TCU and included many of the hundreds of responses we received to the PSR Worker Safety Survey.

One carman from Union Pacific responded: “Working with less employees makes my job unsafe. I feel like I’m being rushed. I was told if we didn’t do the same amount of work, they were going to lay off again. They said that part was up to us. They are still running cars we have bad ordered for unsafe reasons like brake issues, etc. They’re eliminating/violating rules that we would used to get in trouble for, or sent home. They’re saying it’s ok to do these things. It’s because we have less people and they want stuff done in just the same amount of time.”

Watch the full video below: