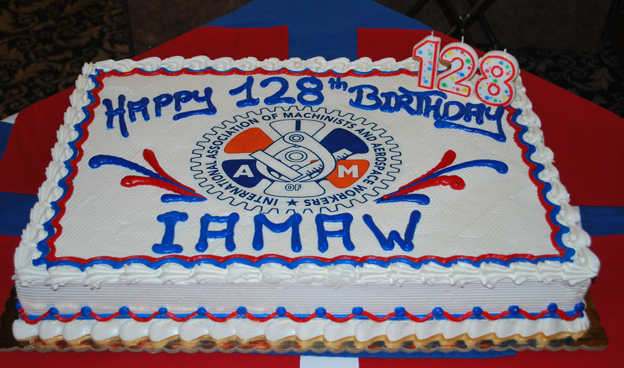 IAM members attending classes at the Winpisinger Center were treated to a cake commemorating the 128th anniversary of the founding of the Machinists Union.

“May 5 marks the 128th anniversary since 19 Machinists met in secret to create the organization known today around the world as the International Association of Machinists and Aerospace Workers.

“It’s an occasion to celebrate the ability of this union to endure and survive every manner of economic and political hardship, from world wars and global depressions to political attacks aimed at terminating our very existence. This achievement required tenacity and sacrifice from literally millions of men and women who believed that our union and its members were worth fighting for.

“This day is also an occasion to rededicate ourselves to the cause of justice in the workplace that remains under constant attack today. Despite great technological advances that have transformed workplaces across North America, we still face a corporate agenda that values profits over people and constantly seeks to suppress workers’ voices.

“I ask each and every member of this great union to pause, be proud and consider our responsibility as beneficiaries of 128 years of victories, struggles, setbacks and ultimately survival. I am totally confident we are worthy of our legacy and equal to the challenges ahead.”