With recent tragic events taking center-stage on Capitol Hill, President Obama reluctantly signed another two-week extension of the current Highway-Transit bill. The bill had been scheduled to expire this evening. The extension should provide lawmakers the needed time to hammer out the final details on a much longer bill that would potentially provide authorized funding for up to six years. Politico is now reporting that one of the main disagreements is between House T&I Chairmain Bill Shuster (R-PA) and Ranking Member Peter DeFazio (D-OR) who disagree on the length of the legislation.

And while the legislation to come out of negotiations with the House and Senate is much anticipated, TCU members remain frustrated at the low levels of funding, especially for transit. “The final bill won’t be terrible, but it’s certainly not going to include the kind of investment our country needs to continue to compete globally and to create more of the good-paying jobs that the transportation sector is known for,” said National Vice President and Legislative Director Ron Kloos. 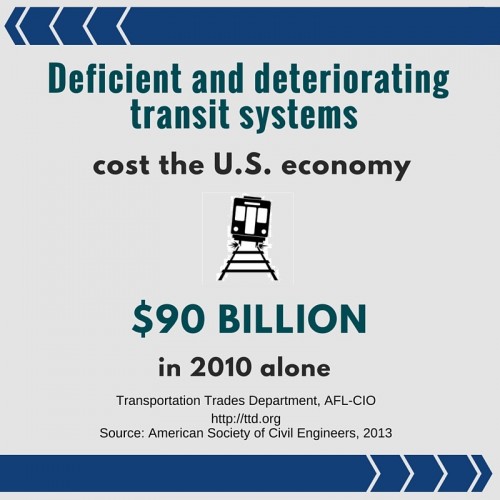 Last week, the Transportation Trades Department, AFL-CIO had some of the same concerns about the deficiencies of the legislation:

Let’s be clear: this bill will not come close to fully funding the needed expansion and modernization of our transit and highway networks. That price tag is in the trillions (yes, trillions with a “t”). The House bill came in at $325 billion and the Senate did a little better.

Click the link to read their full piece titled Highway and Transit Infrastructure Funding By The Numbers.