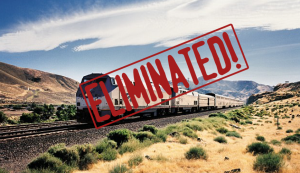 Q: So, what does this mean for TCU/IAM members?

A: Right now, not a lot. But it is very alarming nonetheless – even if nobody is in imminent danger of losing their jobs.

Q: Will this budget become law?

A: The President’s Budget is never actually passed into law as-written, but it does act as a guide for Republicans on Capitol Hill. After all, it is Congress that writes the budget, not the President. But since this year they are all from the same party, you can bet there will be a lot of similarity between what the President offers and what Congress passes.

Current funding goes through September, so nothing will be happening just yet. However, the fact that President Trump’s budget actually calls for the elimination of Amtrak’s long-distance service is frightening since it would cause thousands of TCU/IAM members to lose their jobs.

This should serve as a reminder to all working families that Elections. Have. Consequences.

If working people don’t show up to the polls, or review the real issues before voting, the security of our jobs and retirement are put at risk.

Nevertheless, the TCU/IAM Legislative Department will continue to fight for you and your families in Washington D.C.

Remember to check back often to hear the latest.