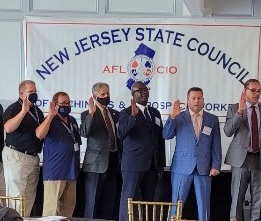 Pictured above: The newly elected officers of the New Jersey State Council of Machinists are sworn in.

Anthony Stevens a 30 year TCU member and New Jersey Transit (NJT) worker, Division Chairman of Unit 167 and six time Local Chairman of Lodge 626 was elected to the New Jersey State Council of Machinists (NJSCM) as Director of the Legislative Department. 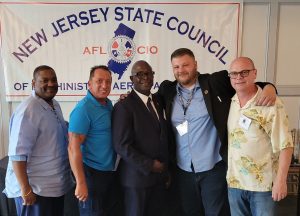 Anthony has tirelessly fought for the rights of his members on NJT for 18 years.

His institutional knowledge of NJT history, beginning when it formed from Conrail thru today, has made him the go to guy for answers for TCU as well as the other Unions on the property.

He has been politically active for 30 years in New Jersey making the selection of him as Director of the Legislative Department of the NJSCM a perfect fit.

TCU President Maratea said, “We are proud of Anthony for his dedication to our Union and our TCU brothers and sisters.”

“We congratulate Brother Stevens in his new role, we know he will be a valuable asset to our union members in his role as Director of the Legislative Department of New Jersey State Council.”