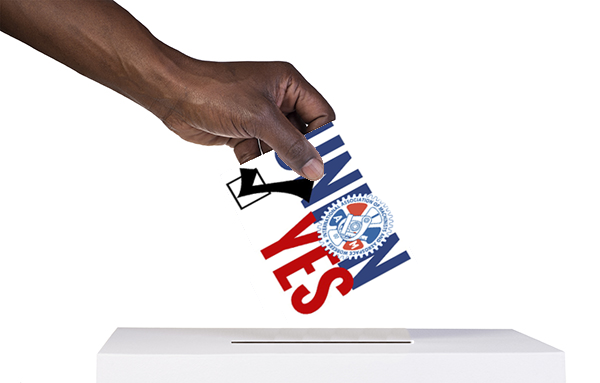 Bob Martinez, Machinists Union International President: “The South Carolina Flight Readiness Technicians at Boeing have spoken loud and clear. They want to be a part of the International Association of Machinists and Aerospace Workers. I commend them for the courage and integrity they have demonstrated through this contentious process. I am asking Boeing to respect their freedom to choose and not retaliate against them for expressing their rights. The historic votes cast by the 176 Flight Readiness Technicians are not a collective vote against Boeing; it was a vote for the return of American prosperity. Unions are the best mechanism for protecting the interest of working men and women. When unions and business collaborate, the American economy prospers and all Americans benefit.

Mike Evans, IAM Boeing South Carolina Lead Organizer: “Today was a victory for the American worker. The 176 men and women Flight Readiness Technicians stood up with South Carolina pride and voted for a better life. They exercised their freedom to join in union and speak with one voice. This election was never just about wages. The men and women wanted dignity and consistency in the workplace. And this vote put them closer to achieving those goals. We hope Boeing does the right thing by agreeing to sit down and negotiate in good faith with the dedicated Flight Readiness Technicians.”

Vinny Addeo, IAM Organizing Director: “I want to personally welcome the 176 men and women to your Union! We pledge the full support and resources of your union, the International Association of Machinists and Aerospace Workers. The same way we do now, for more than 35,000 Boeing employees at 24 locations nationwide. You now have the power to negotiate for a better life for your families. Your vote today is historic and it will help knock down barriers in workplaces all over the nation.”

Jon Holden, District 751 President: “We want to congratulate the flightline mechanics in Charleston, SC who have successfully stood up to the Boeing Company and very strongly stated that ‘we want rights on the job.’ All the captive audience meetings had no impact. The workers were not intimidated and chose to be represented by the IAM. This is the first step in their efforts to gain fairness and a voice on the job.”