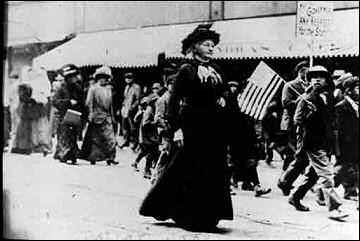 The theme for International Women’s Day this year is Choose To Challenge, with specific action plans that reverberate longstanding Labor movement principles: Take action for equality, a challenged world is an alert world and from challenge comes change.

Historic inspiration and strength to invoke change can be gained from one of Labor’s most fiery and prominent activists – Mary G. Harris Jones.

Known worldwide as Mother Jones, and “the Miner’s Angel,” she was an Irish-born American schoolteacher and dressmaker who, after devastating personal tragedy became a prominent union organizer, community organizer, and activist. She helped coordinate major strikes and co-founded the Industrial Workers of the World.

Jones became an organizer for the Knights of Labor and the United Mine Workers union in the late 1800’s. By 1902, she was called “the most dangerous woman in America” for her success in organizing mine workers and their families against the mine owners. In 1903, to protest the negligent enforcement of the child labor laws in the Pennsylvania mines and silk mills, she organized a children’s march from Philadelphia to the home of President Theodore Roosevelt in New York, called the “March of the Mill Children.”

Mother Jones also organized a massive show of support for Eugene Debs, the leader of the American Railway Union, after he served a six-month prison sentence for defying a court order not to disrupt railroad traffic in support of striking Pullman workers.

Known for her fearlessness and eloquence, the self-described hell-raiser famously declared in front of a mass audience in Toledo’s Memorial Hall, “All progress stops in the contented man. I’m for agitation. It’s the greater factor for progress.”

TCU Vice President Mary Gunn said, “From my own Irish heritage to being elected as the first female Vice President of our great Union, I am proud to not only carry Mother Jones’ torch, but to hopefully ignite the flame of solidarity in others.”