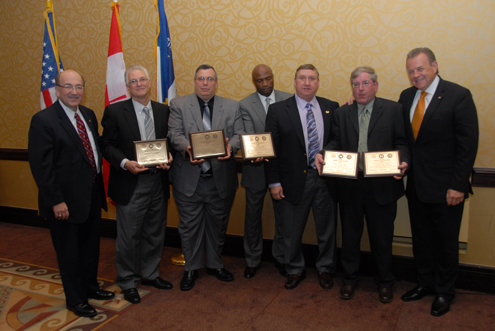 These awards are given annually to lodges based on a lodge’s participation in MNPL and the Machinists Education Fund.  In every session of Congress, members of the House and Senate address issues that crucially affect how we and our families will earn our living and live our lives.  It is TCU members like those in these lodges that continue to allow TCU and its members to have an effective voice with these decision-makers.

The 2010 TCU/IAM Local Lodge winners are Lodge 886 (Local Chairman Juan Manual Rodriguez), Lodge 5101 (Local Chairman Steven Hirschbein); Lodge 5093 (Local Chairman Kristofer Stark); and Lodge 2512 (Franklin M. Canter) who have been presented with the 2010 MNPL award of excellence for the Lodge’s outstanding contribution to MNPL.  Congratulations to each of these lodge officers and members for a great job.

Any lodge who would like more information on the 2011 MNPL awards program under way, please call the Legislative Department at 301-840-8704