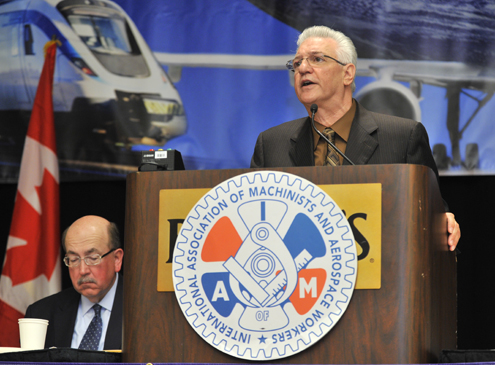 More than 160 TCU delegates joined IAM delegates from across the country to hear about important issues affecting TCU/IAM members in the transportation industry. TCU delegates were close to half of the total delegates.

Ed Wytkind President of the Transportation Trades Dept., AFL-CIO and Linda Puchala Chairman of the National Mediation Board also addressed the crowd. 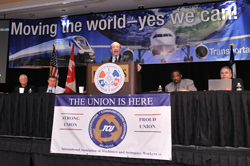 President Scardelletti was warmly received by the conference with a rousing, standing ovation. He spoke of TCU’s continued Legislative efforts; National Freight Rail Negotiations and the inclusion of TCU with IAM on the full merger date of Jan 1, 2012,  “I bring you greetings from 50,000 TCU members who work on America’s freight railroads, Amtrak, Commuters and Transit, Disney World and many other companies.”

“On January 1 our merger with the IAM becomes complete. I look forward to that date as the most historic event in the history of TCU. With our merger into the IAM, I see a burst of new energy, a golden opportunity to renew and reinvigorate TCU’s own identity as a union unsurpassed in its commitment to member representation and involvement.”

“Our merger with the IAM will provide us with resources and opportunities not only far-beyond our former capability but beyond anything I could have ever possibly imagined for our union.”

On National Negotiations he spoke with certainty, “I promise you that we will reach an agreement that will make our members proud of their union.”

President Scardelletti concluded,  “Brothers and sisters, years ago when I began working nights in the Cleveland rail yards I learned quickly that I could not depend on the company as we are merely a means to their profit, to be discarded at their whim. I believed then, as I do now, that it is the union that gives us the strength to live with dignity and respect on and off the job.”

“Everything we have on the job comes from the union and much of what we have at home comes from our paycheck – a product of the union contract.”

“Without the union, the company would slash our wages and benefits to rock bottom.”

“You have never heard a company say, ‘we’re making enough money.  Let’s give some to the employees.’  And you never will.  Corporate greed will grind you into poverty.”

“Brothers and sisters – The union is the last line of defense for the American worker.”