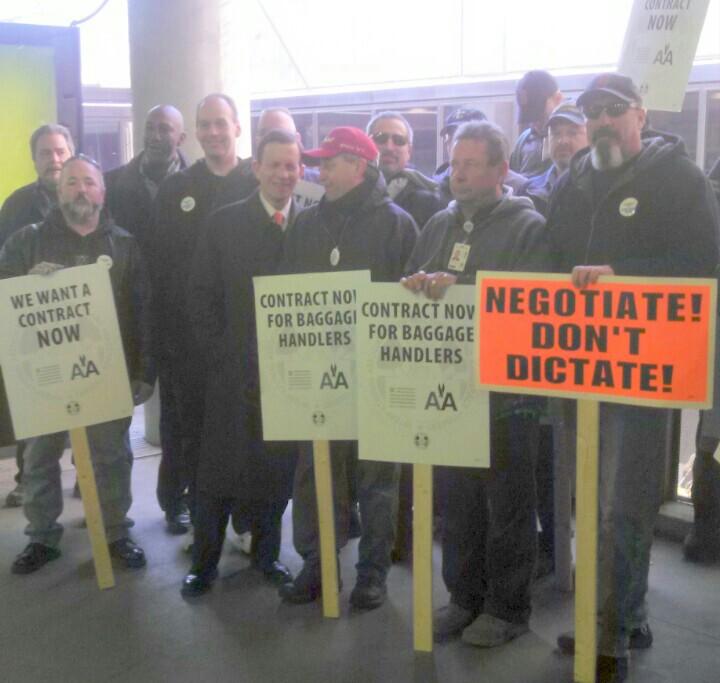 IAM-represented ground workers at US Airways conducted informational pickets across the country to protest the carrier’s insistence that they accept second class status and agree to lower wage rates than other employees at the “new” American Airlines who perform the exact same work.

IAM members were joined by Transport Workers Union (TWU) members who perform similar jobs at pre-merger American Airlines. Together they informed passengers about the dire and deteriorating state of labor relations at the airline.

“Doug Parker wants the flying public, shareholders, Wall Street and anyone else who will listen to believe that all is going well with the merger of US Airways and American Airlines. That is simply untrue,” said IAM District 141 President Rich Delaney.”

“The TWU and IAM are partners,” said TWU President Harry Lombardo. “We will not sit idly by as management tries to drive a wedge between workers.”

“The ‘new’ American will remain divided as two separate airlines and possibly suffer a strike before this merger happens,” said IAM District 142 President Tom Higginbotham. “Doug Parker is out of touch. US Airways needs to show some respect to IAM ground workers or this situation will rapidly deteriorate.”

“I was proud to stand in solidarity with the men and women from Machinists Local 1726 this afternoon,” said Grossman. “These workers deserve a fair contract that pays fair wages with fair benefits, and I will stand with them every day as governor.”

IAM-represented ground workers have been in negotiations with US Airways for almost three years and requested a release from mediated talk from the National Mediation Board (NMB) last year.

The IAM and TWU alliance represents over 30,000 ground workers at the ‘new’ American and is the largest union at the airline.