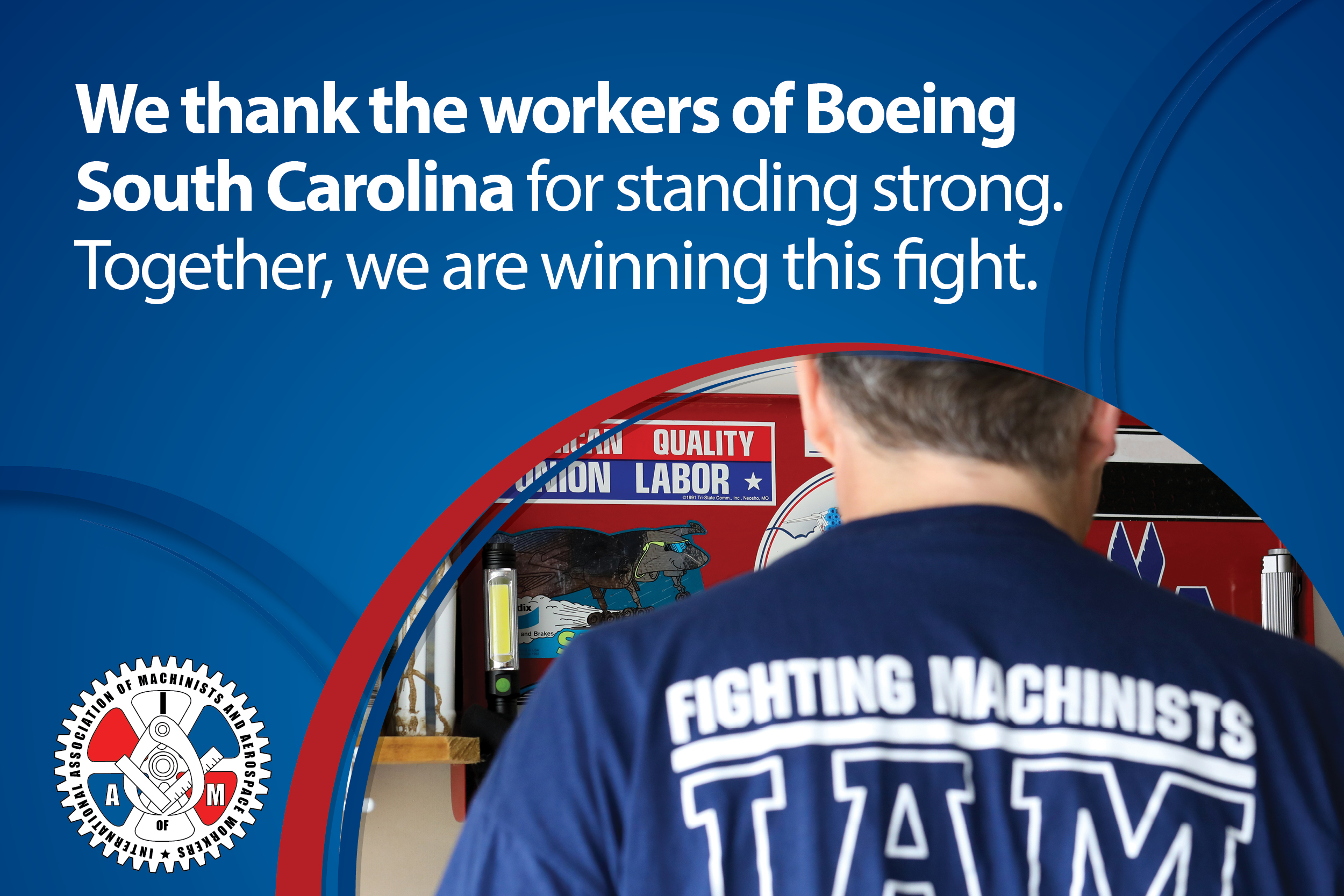 WASHINGTON, Aug. 19, 2019 – Five instances of company discipline and unjust terminations of IAM members at Boeing’s 787 Dreamliner manufacturing facility in North Charleston, S.C. have been found to be acts of unlawful retaliation against employees for their support of the union, a regional director for the National Labor Relations Board (NLRB) has informed the IAM.

A group of 176 Flight Line Inspectors and Technicians voted nearly 2-to-1 in May 2018 to join the IAM. Violating federal law, Boeing has refused to bargain with the IAM and resorted to harassing and unjustly terminating six union supporters on the Flight Line during the 2018 holiday season. The IAM filed unfair labor practice charges (ULPs) against Boeing alleging illegal retaliation for their open support for the union and Boeing’s refusal to bargain.

The Regional Director found five of six termination cases constituted unlawful discrimination against union supporters, including all three of Boeing’s alleged “bird-strike” cases, in which the company selectively and without precedent used safety inspection rules to unjustly terminate IAM members. This is the critical first step in an NLRB process that should lead to the return to work of these unjustly terminated workers.

Boeing is challenging the May 2018 NLRB election results despite the Regional Director’s ruling that the collective bargaining group of 176 Flight Line workers meets the requirements of an appropriate unit under the National Labor Relations Act.

Elected officials from across the country have joined the IAM in calling on Boeing to negotiate with its Flight Line workers and raised questions about Boeing’s repeated practice of fabricating safety violations to retaliate against union supporters at its South Carolina plant.

“This ruling is a landmark first step to victory for workers at Boeing South Carolina,” said IAM International President Robert Martinez Jr. “Boeing has continuously and systematically ignored the law and trampled on the rights of its own employees in South Carolina. We call on Boeing to immediately reinstate our members, sit down now to negotiate a contract with its Flight Line employees, end its scorched-Earth anti-union campaign and get back to the business of working with the IAM and our members to build aircraft. Now is not the time for Boeing to be abusing its safety rules to harass and fire experienced and skilled workers who are critical to the safety of Boeing airplanes.”

“We applaud the NLRB regional director for following the guidelines of federal labor law and ruling in our favor,” the group of unjustly terminated workers said. “Our support for IAM representation should have never been reason to be unjustly fired. We would like to place this behind us. Now is the time for Boeing to do the right thing and allow us to return to work.”