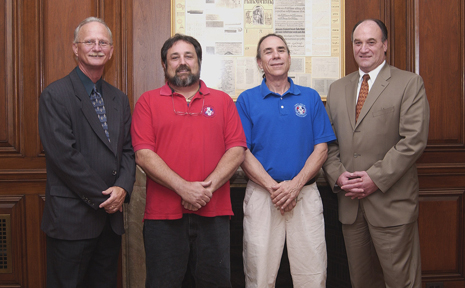 July 1, 2008 – For nearly a decade, the bargaining committee of Franklin Local 2135 in Washington, D.C., struggled to overcome federal bargaining restrictions and secure better wages for the 37 members employed as machinists at the Government Printing Office (GPO).

On June 5, 2008, after a prolonged standoff at the bargaining table, the union reached a five-year agreement with the GPO that achieved their goal; parity in wages with employees who perform similar work at the Bureau of Engraving and Printing (BEP). The bargaining unit realized a 23 percent increase in wages over the life of the agreement, including retroactivity to December 2006 and a $3,000 lump sum signing bonus.

“It was a team effort,” said BR Rick Comphers. “John Elfrey and Bill Gimbel never grew weary of the fight and kept their eyes on the prize. The committee worked tirelessly to keep the process moving forward and ensure the membership received the pay that they deserved.”

The victory was a long time in the making. In September 2006, the GPO withdrew a proposal that would have settled the dispute and instructed the parties to begin the process from scratch. Despite the delay, the local committee maintained their campaign and achieved an agreement that was unanimously ratified.

“The membership of Franklin Lodge 2135 should be proud of the tenacity and courage their bargaining committee displayed throughout this stressful ordeal,” said Director of the Government Employees Department Frank Carelli, who participated in the lengthy negotiations. “It was truly my pleasure working with them.”