A Deserving Contract for Cape Members 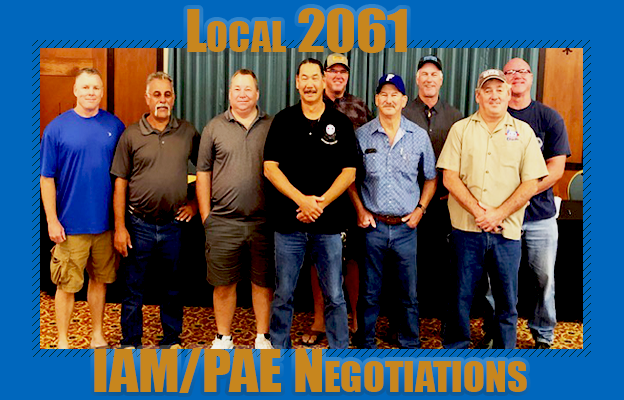 More than 300 employees from Local 2061 who work for PAE, Inc. will enjoy the hard-earned fruits of their labor over the next three years. The IAM’s Southern Territory, working in conjunction with the Aerospace Territory, was able to bring home a strong machinist contract that provides for workers and their families, while creating a path for the next generation of men and women who will shoot for the stars.

“Our members have been involved in the Space Program since before JFK made his fateful promise to the  American public that we would reach the moon in less than a decade. The machinists heard that call and got to work,” said IAM’s Southern Territory General Vice President Rickey Wallace. “And since that day, we haven’t stopped. That’s why the IAM members who work at Kennedy Space Center deserve the type of contract we were able to deliver.”

Right off the bat, the wage increases in the three-year agreement puts the machinists at PAE in-line with industry level wages throughout the aerospace field. Members will gain nearly 12% increases over the lifetime of the agreement, with increases to the IAM pension plan yearly. Stronger severance language and more time off and bereavement days was a way to make sure these members are able to properly take care of their families.

“This is the type of contract that should be duplicated in shops up and down the Space Coast,” said IAM’s Aerospace General Vice President Mark Blondin. “The men and women working in this industry have, quite literally, changed the way we look at space travel and the developments its research adds to our everyday lives. This contract acknowledges their contributions with substantial general wage increases, secure retirement, affordable health care coverage and job security for the future.”

At the request of the membership, there are tougher restrictions on subcontracting and increased pay for work shifts outside of the norm. These were two areas in which the negotiating team made sure to solidify in this contract. One of the most significant changes was the agreement to start an accredited apprentice program for all crafts, therefore ensuring jobs for the next generation of Space Coast workers.

“Our membership on the shop floor never waived from what they wanted, neither did the negotiating team at the table. I was very proud of the way they stood together and fought for a contract deserving of these members who have written this country’s history in the space industry,” said ADBR Kevin DiMeco of District 166. “This new agreement will no longer allow PAE to make arbitrary decisions that affect the men and women who are working every day to make sure this corporation succeeds. As one, we stood strong and forged a foundation we can all stand on.”