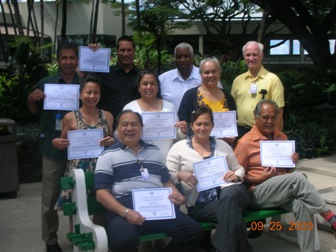 This week eight IAM CREST Associate Instructors for the Airline Industry from District Lodge 141, Local Lodge 1979 provided Hazardous Material Awareness classes for 27 IAM members, supervisors and managers of Hawaiian Airlines at Honolulu International Airport.  The classes were developed by IAM CREST to enhance the current training provided by Hawaiian Airlines for workers who handle dangerous goods by air under a grant funded by the Pipeline and Hazardous Material Safety Administration. These classes were provided as a Pilot Program that will be delivered to Hawaiian Airlines employees that address the importance of identifying dangerous goods, their hazards and proper handling procedures.