Since the organization of the Life Safety Code (LSC) in 1913 by the National Fire Protection Association (NFPA) Committee on Safety to Life, the committee has been devoted to studying fires that have resulted in fatalities. These studies gave direction in creating the construction standards for stairways and fire escapes as well as for fire drills and exiting from schools, factories and other high-occupancy buildings. Studies from the collapse of the World Trade Center Towers (2001) and The Station nightclub fire (2003) have greatly influenced the changes made to the 2009 LSC.

Despite its title, the LSC is not a legal code. It’s not published as an instrument of law and has no statutory authority unless adopted by a jurisdictional authority. All or part of the code may be adopted and enforced by an inspector, zoning board, fire marshal or other officials. However, the standard—completely adopted in many states and partially in the remaining states—is deliberately written with language suitable for mandatory application to facilitate adoption into law. See the current NFPA State wide adoption map below.

The Life Safety Code is unique among most codes in that it applies to both existing and new structures. When a code revision is adopted into local law, existing structures have a grace period before they must comply.

For the most up-to-date information on the code, including proposed and accepted TIAs, visit the NFPA web site at http://www.nfpa.org 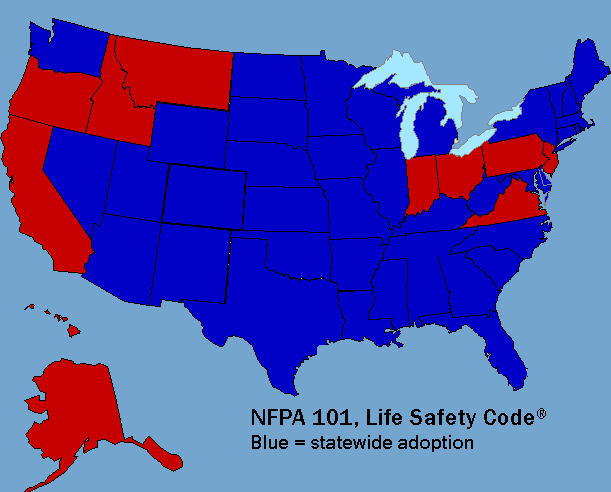