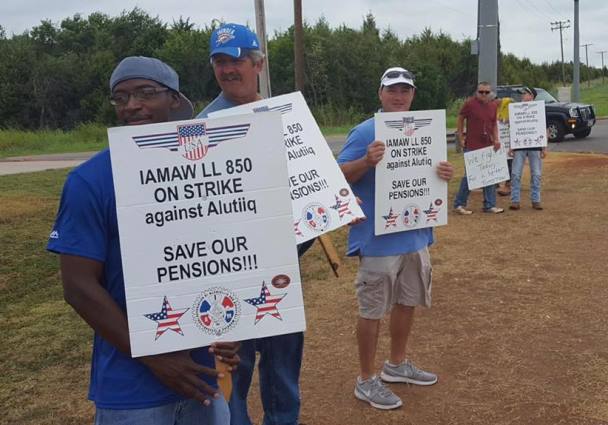 Now into the fourth week of a strike at Tinker Air Force Base, IAM Local 850 civil engineering workers are sending a strong message in a fight to maintain the pension that’s been in their contract for the past 16 years.

More than 240 members are walking the picket line in solidarity against Alutiiq Commercial Enterprises, a new contractor at the Oklahoma City base. Alutiiq took over the service contract on August 1 and promptly announced they would not contribute to the well-established pension plan. They are also planning changes to health care and overtime benefits.

“These are huge issues, some of these people have been paying into the pension for 16 years,” said Local 850 President Ben Moody during a local television interview. “And to have a new company come in and try to take it away with the stroke of a pen is just unfair.”

“This strike is about the retirement security of our members and their families,” said Southern Territory General Vice President Mark Blondin. “Our members throughout the Southern Territory are proud of their courage to take on this employer and stand up for their pension. We call on Alutiiq to bargain to end this strike by including the pension in the offer, just like many contractors have done at this site for the past 15 years. Our members want an acceptable offer and to return to their mission.”

Since the strike began, the company has been unwilling to negotiate with the union, but announced they will come back to the bargaining table on August 30. Picketers began receiving their first strike benefit checks on Monday.