If You’re Not Willing to Make Change, Change Won’t Happen 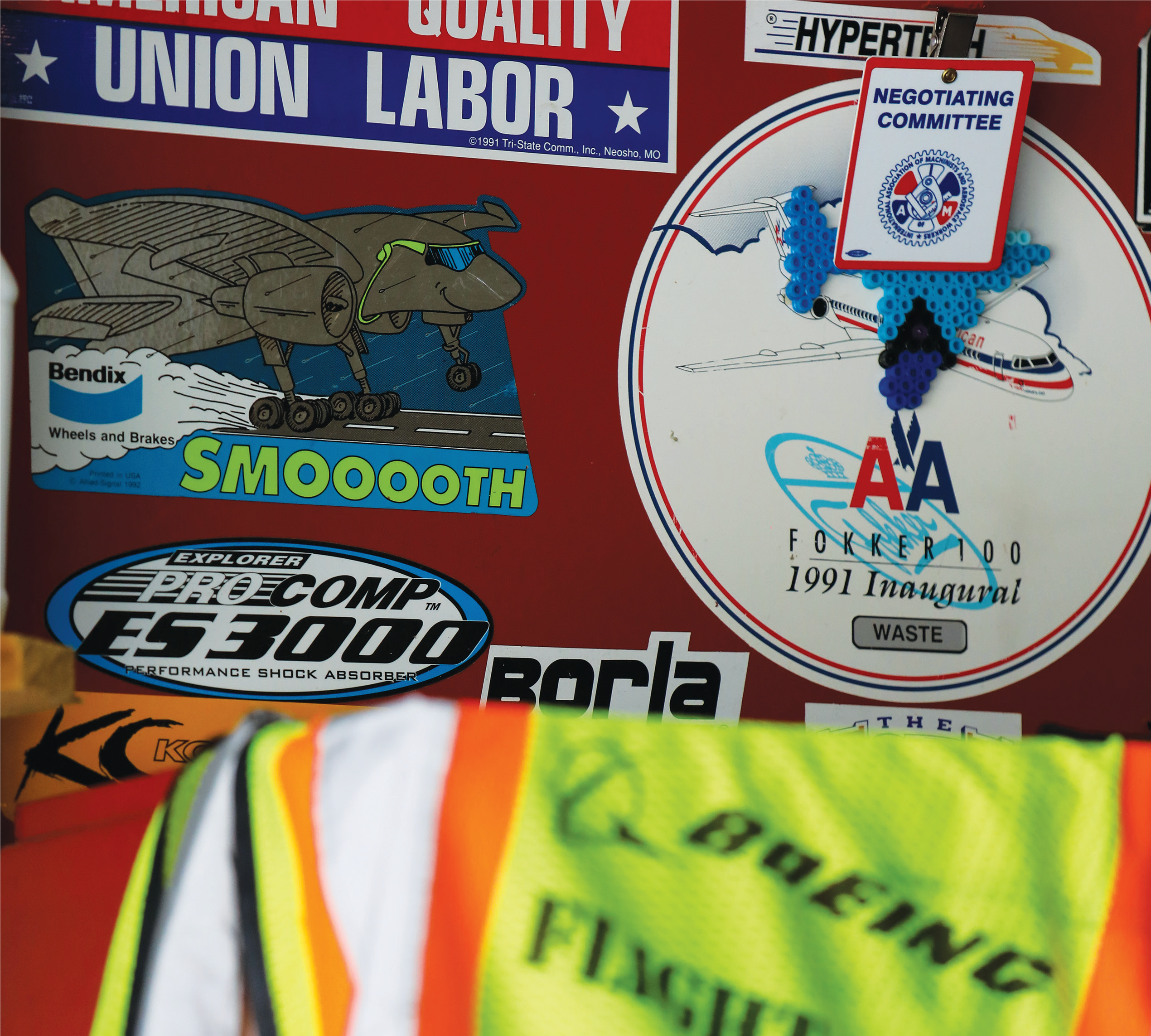 The Machinists Union and 35,000 of its members have long maintained a working relationship with Boeing, the world’s largest private commercial aircraft company. So why aren’t workers in South Carolina getting the same opportunity?

When 178 Flight Line workers at Boeing’s North Charleston, SC manufacturing facility voted to join the IAM by a margin of nearly two-to-one, the group of highly skilled technicians understandably hoped the company would begin negotiations with the union. Why wouldn’t they? Boeing already has contracts with the IAM at 24 other sites nationwide. Nearly a year later, the company refuses to acknowledge the union at its South Carolina plant.

“Why should these workers be subject to a different set of standards and rules than folks building the exact same plane in Seattle?” asked IAM Boeing SC Lead Organizer Mike Evans. “They just wanted to be treated with the respect they deserve.”

The “why” dates back to well before the facility opened, as Boeing began increasing its presence in the “right-to-work” South.

“If you lived here or read anything about it, you knew that one of the reasons they came here was the fact that there was no union,” said IAM Local 531C member Karl Anderson.

With one of the country’s lowest union density workforces, South Carolina state and local politicians further enticed the company to expand there by offering hundreds of millions of dollars in tax breaks and deferments. As part of its plan to develop a second 787 Dreamliner final assembly location, Boeing strategically partnered with, and then acquired, existing suppliers in South Carolina. It seized the lucrative incentives and opened its South Carolina 787 delivery center in November 2011, paying workers far less than those doing the same jobs in Washington state.

IAM Local 531C Vice President Michael Voirin expected to see the IAM on the property when he relocated from a union airline job in Fort Worth, TX.

“I’ve worked on Boeing products my whole career, and I’ve always dealt with the IAM Boeing guys, so I just assumed,” said Voirin, who came with nearly 25 years of aircraft experience. “But I got here and it was non-union.”

Voirin recalls that when the plant opened and the production process was evolving, management treated employees well. But as time went on, attitudes changed.

“They manage by fear and intimidation, and I don’t think that’s how you treat people,” said Voirin. “Right-to-work is really right-to-fire-you-at-will. I mean it’s such a misnomer.”

With no voice in how they were treated, workers looked to the IAM for help organizing the entire production facility. Boeing answered with a multi-million-dollar campaign on the shop floor and in the media. Targeting workers and a local community with little knowledge of the value of unions, the company bombarded employees and families with slanted media coverage and misrepresentations of the IAM.

In February 2017, the vote to unionize the plant took place. The company’s tactics prevailed and the workers remained without a union.

“I believe the money they poured into fighting us is because they want complete control of everything,” said IAM Local 531C President Chris Jones. “The employees that are hourly don’t have a say in anything.” 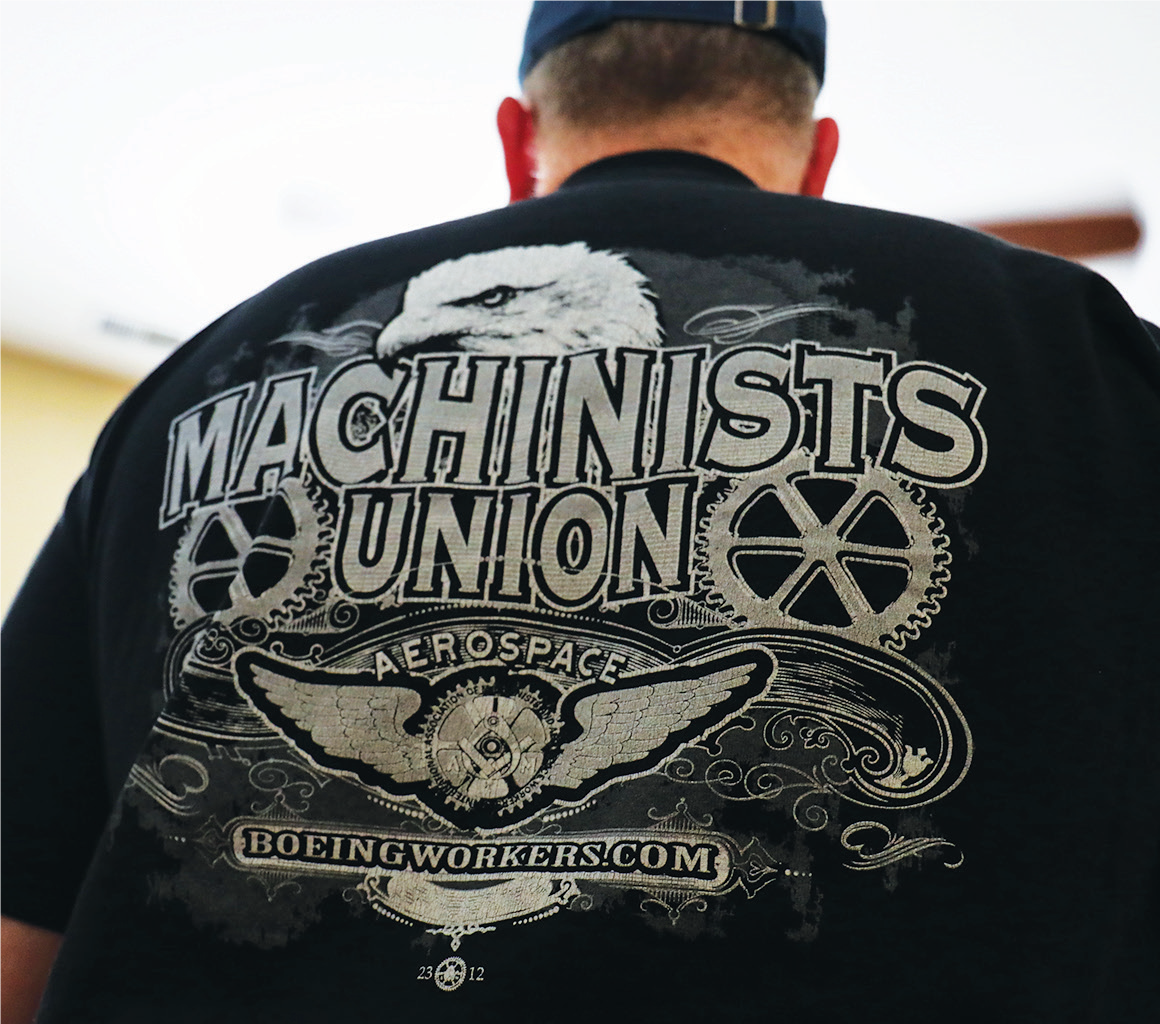 d other experienced certified airframe and powerplant (A&P) mechanics on the site understood the benefits of working with a union contract. Knowing the amount of energy and resources the company was willing to put into fighting the union, the group began a new “underground” organizing campaign of their own. They collected the required number of union authorization cards and filed with the National Labor Relations Board (NLRB) to have an election for Flight Line workers.

“Of course, Boeing was upset and started to spread rumors about what would happen if we did,” said Jones. “We had a hearing with the NLRB that lasted two weeks, and we won that hearing.”

On May 31, 2018, the workers voted yes to IAM representation, but Boeing refused to recognize the union. The company filed an appeal challenging the mechanics’ classification, which still drags on today. Boeing also began looking for ways to target employees who openly supported the IAM.

“I was pro-union, but at the same time I was a company guy,” said Local 531C member Joseph Delmarco. “I worked my butt off and did everything I could do to help get the planes out of there to make us look good as a company.”

Delmarco already knew he wanted to work for Boeing when he went to school to certify as an A&P mechanic. He even put in an additional thousand hours of avionics training prior to applying for his job there.

“I was at the top of my class and got the job right out of school,” said Delmarco. “I worked there just shy of five years and I was a lead for the last three.”

A few months after the union election, Delmarco and two other Flight Line workers who had supported the IAM were suspended.

“I had no idea what was going on. They wouldn’t tell me at the time what I was being suspended for or how long,” said Delmarco.

A Boeing investigator from another site then contacted Delmarco with questions about procedures for a bird strike on an aircraft. He learned the company was claiming he had failed to report one. On the day in question, the flight crew had seen birds in the area, but saw nothing when they inspected the plane after the flight. Delmarco also checked it and found no evidence of a strike, so he completed his formal inspection and signed off.

“About a month or so later, my second-level supervisor called and I was terminated over the phone,” said Delmarco. “There was never any evidence presented that it was a bird strike. I mean there are so many major things that got overlooked in the past, and they just swept them under the rug without even a write up.”

A subsequent Federal Aviation Administration investigation supported the workers’ assertions that there was no evidence of a bird strike.

Local 531C member Mahmoud Hamada worked in a group on the 787-10 program, which strongly supported the union. He needed to fly overseas because of a family medical emergency and applied for a leave of absence.

“I submitted what they requested, but the doctor who had all the paperwork placed the wrong dates,” said Hamada. “So, I got fired because of that. I didn’t get any warning calls or emails. I got nothing and I believe it was illegal. I think they did it on purpose.”

Boeing executed six discharges in late 2018, and each employee fired happened to support the union.

The IAM filed unfair labor practice charges against Boeing on behalf of the discharged members.

When word got out about the situation these members were facing, Machinists from across North America stepped up to show support.

“The IAM put a fundraiser together for the six of us who were out during the holidays,” said Delmarco, who has a 4-year-old daughter. “They understood the implications of being without a job at that time of year. It was absolutely amazing to help us out through the holidays and help us provide for our kids and families.”

In total, the union, spearheaded by District 751 members in Seattle, raised more than $35,000 for members they had never met.

Implementing and ensuring consistent policies for fair treatment of employees, worker safety and producing quality aircraft are but a few of the reasons the IAM fought to win representation at Boeing South Carolina. For the Flight Line workers of Local 531C, those wrongly terminated and those still employed, the fight is far from over.

“If you accept the status quo and the norm, that’s exactly what’s going to happen. It doesn’t have to be that way. You deserve what you put into something,” said Jones. “If you’re not willing to make change, change won’t happen.”