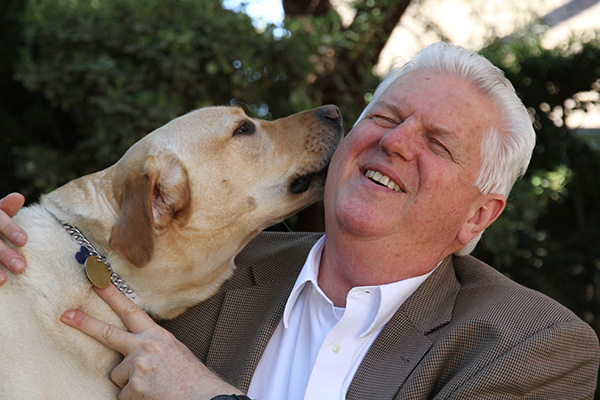 Guide Dogs of America (GDA) has for decades been the IAM’s No. 1 charity, with the union and its members increasing financial support for the school each year.

The life-changing benefits generated for blind and visually impaired guide dog recipients cannot be estimated in dollars however.

Olzak and his guide dog, Goliath, seem to have no limits to what they do and where they go alone. To say they are inseparable would be stating the obvious.

“I have mobility and companionship, and no matter where I go I’m never alone,” said Olzak. “I’ve literally got the best friend I’ve ever had walking with me, who I know will take care of me and never let anything happen to me.”

In January 2017, Olzak teamed up with Goliath, his second GDA guide dog.

“I had to retire my old guide dog, Wrigley, after 13 years of service,” said Olzak. “That’s a long time for a guide dog. Normally a guide’s service life would be about nine years.” 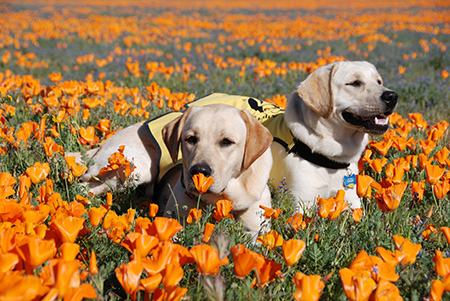 Olzak, at 6 feet 2 inches and 225 pounds, made it clear he is from the “John Wayne school of manliness,” and that big boys don’t cry. But when GDA’s Tami Johnson came to take Wrigley to a foster family for retirement, it was more than Olzak could take.

“I’m glad that my wife and no one else was around. Because when she came and picked him up, I kneeled down and I literally cried, like a big baby,” said Olzak. “Think about it. This is someone who has been with you 24-7 for 13 years.”

In Olzak’s backyard, there’s a table for grooming and a spot for Goliath to relieve himself. It’s aptly named Wrigley Field.

“I’ve flown over 30,000 miles in the air with my dog,” said Olzak. “We went everywhere. We went to Boca Raton, to Louisville, to New York and Sacramento, doing presentations. And literally, the guide dog was the focal point. When people see me, they remember my guide dog’s name, whether it’s Goliath or Wrigley, and say to me, ‘and your name was?’”

Olzak’s independence and that of the over 1,700 other graduates of the school, are the result of a unique organization. GDA’s effectiveness stems from committed staff and volunteers who undertake the behind-the-scenes tasks that result in successful guide dog teams.

For all the school’s accomplishments, GDA’s team is remarkably small. The modest staff is charged with maintaining the administration, facilities, in-house breeding and kennels, along with the puppy, veterinary and training programs.

“Before I came out here to Sylmar, I was a volunteer back east and worked to support the school through fundraising activities for over 16 years,” said Gittlen. “Now I see firsthand how GDA depends on the talents and generosity of so many dedicated people. We could not succeed without them.”

In addition to full-time staff are volunteers and fundraisers across North America. Without these generous people—many of whom are Machinists Union members—it would be impossible for the school to continue to grow. Part-time volunteers assist in various capacities at the Sylmar, CA campus and volunteer families take on the crucial duties of puppy raisers.

“I call puppy raisers crazy, because who can raise these dogs and then give them away,” said Olzak. “It always amazes me. These people give 15 months of their time—and their love, and their care—and willingly give up a beautiful animal so they can help someone like me, or some other blind person.”

Beginning in 2017, GDA added an additional class to its calendar, which will result in 60 guide dog teams graduating each year, an increase of 20 percent. The school also began a puppy enrichment program to provide more enhanced and structured development. The program introduces puppies to new experiences and challenges at an earlier age. The campus has become more available for puppy raisers to temporarily board dogs, which gives them increased outside-the-home socialization. When dogs enter their formal training, they are better equipped for learning the skills and behaviors required of a guide dog.

“All of the work we do here takes financial support,” said Gittlen. “The school receives no funding from federal, state or local governments. It’s solely from donations by individuals, corporations, foundations, regional chapters and clubs that we survive. I cannot possibly thank our IAM members enough for all they do throughout the year.”

Olzak knows his relationship with Wrigley, and now Goliath, would never have been possible without the help of others. He drew from the late cultural anthropologist Margaret Mead, who said: “A few committed citizens can change the world.”

“And the Machinists are that committed few,” said Olzak, “who are changing the lives of people such as myself in ways that can never be measured by money. That’s for sure.”