In Defense of Real Economic Stimulus

While members of a House-Senate Conference Committee hammer out the details of a bill to stimulate the economy, IAM President Tom Buffenbarger is calling on lawmakers to move quickly before the recession gathers unstoppable momentum.

In addition to urging quick passage of the tax cuts, spending programs and the ‘Buy American’ provisions currently under consideration, Buffenbarger also called for a second stimulus package, one focused on rebuilding America’s manufacturing economy.

“Our only recourse is to make things other nations will buy,” said Buffenbarger in ‘U.S. Jobs Worth Fighting For,’ an editorial published in this week’s Chicago Tribune. “To stimulate our own economic revival, we must renovate our plants, install new machinery and hone the skills of our workforce.”

The need for high-tech skills training has never been more acute, argued Buffenbarger, as the economy shifts gears and millions of displaced workers begin to look for opportunities to reenter the workforce.

“Two years of technical training should be offered to recent high school graduates and recently unemployed adults,” said Buffenbarger. “Tuition at community colleges, universities and high-tech institutes should be heavily subsidized by the federal government as it was after World War II.”

Click here to read the full editorial in the Chicago Tribune.

Mapping the Decline of a Once Robust Economy

There may not be a more vivid representation of how much the country has been transformed under eight years of the Bush administration, than these two employment maps from the Bureau of Labor Statistics (BLS). 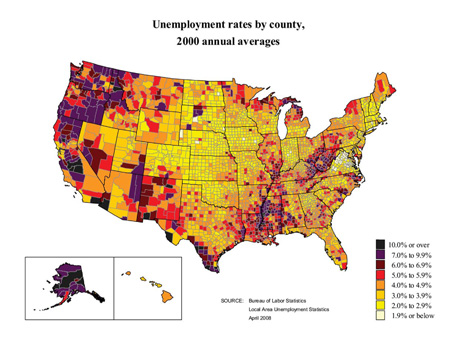 The first map, above, with progressively darker colors indicating higher unemployment rates in each county, reflects an overall national employment rate of 4.0 percent in December 2000. In addition to low unemployment, the country boasted a budget surplus of $167 billion and five consecutive years of real wage growth. 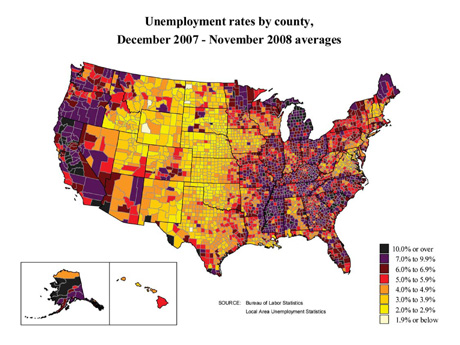 The second map, reflecting average county unemployment data as of November 2008, shows a cancer of high unemployment spreading from Maine to Michigan and deep into southern and western states. As stark as this graphic representation is, it does not include the last three months, when more than a half million Americans lost their jobs each month.

The second map also reflects the eight-year loss of millions of manufacturing jobs and sixty straight months of employment decline in the U.S. manufacturing sector, a fundamental lynchpin of economic activity in hundreds of small towns and cities.

“For eight years, we have witnessed a systematic assault on manufacturing jobs across America,” said IP Tom Buffenbarger. “These maps give a clear picture of the extent of the damage and the amount of work that must now be done. The first step must be to approve the economic stimulus package before Congress and get the money flowing for retooling and retraining. There is no time to lose.”

Working families scored again with the overturning of another anti-worker Bush order.

President Barack Obama revoked the Bush administration’s ban on project labor agreements (PLAs) on federally funded construction projects. The ban was one of the first orders signed by Bush when he took office in 2001.

This latest action is the fourth executive order signed by President Obama that’s meant to reposition the American worker in this ailing economy. The previous three, signed just days after his first day in office, also reversed anti-labor federal contract policies put in place by the former administration.

Obama has also instructed the Director of the Office of Management and Budget to provide recommendations about whether broader use of PLAs, with respect to both federal construction contracts and those receiving federal assistance, might also be necessary.

Register Now for Spanish Leadership Classes I and II 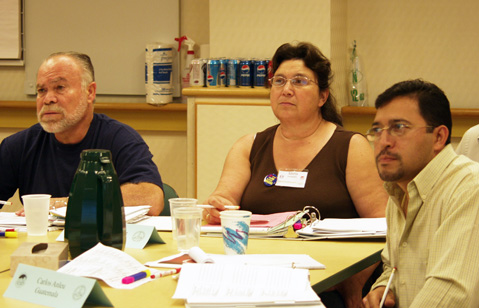 Registrations are also being accepted for the upcoming Spanish Leadership II, which will be held at the William W. Winpisinger Center June 21 – 26, 2008.

The IAM would like to congratulate the professional employees of the U.S. Forest Service’s Eastern Regional Office, located in Milwaukee, WI.

The vote added 43 potential new members to the bargaining unit. The non-professional employees working at the office were already represented by NFFE-IAM Local 2165, which now represents both groups.