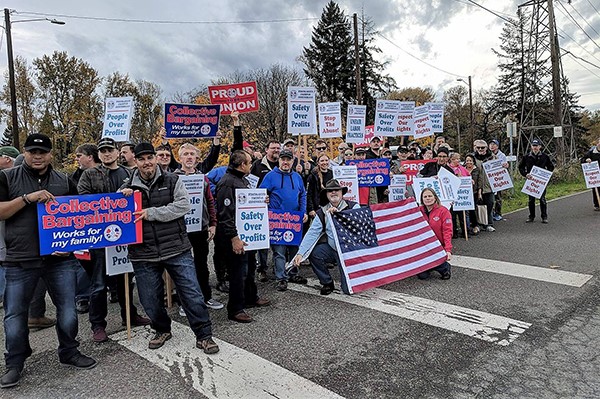 More than three years after voting for union representation, welders working at Precision Castparts in Portland, OR, are finally going to get it. The nearly 100 welders who voted to join the IAM in September 2017 reached a favorable ruling from a federal appeals court denying the company’s claim they couldn’t legally form a union as a specialized group.

In May 2018, the group received a favorable ruling under the National Labor Relations Act. Due to their specialized craft, the ruling stated that the highly skilled welders could be a distinct bargaining unit within the 2,500-person workforce at Precision and could vote to join the IAM as a 100-person group.

The legal battle has gone back and forth through the appeals process with the National Labor Relations Board and the court system, with the final favorable ruling handed down last week from the U.S. Court of Appeals in Washington, D.C. The company has one last appeal, and that would be to the U.S. Supreme Court.

“It’s my hope that the IAM and PCC can finally get down to the business of negotiations, and give the welders at PCC a contract they can be proud of,” said Organizer and IAM Grand Lodge Representative Billy Anderson. “To right the hardships of what the welders have endured throughout this unnecessary long process, PCC can respect their vote for the IAM by bargaining in good faith and doing so now. It’s way past time.”

“It is in moments like these where we see the severe shortcomings of workers’ rights to organize on full display, said IAM Western Territory General Vice President Gary R. Allen. “I salute the resilience of the workers at PCC. I have no doubt that our new Sisters and Brothers will have a profound impact on our organization. Now begins the hard work of winning an IAM agreement for these brave workers. We will do everything in our power to support the District and local leadership in fighting for a good first contract.”

“These workers have overcome every possible obstacle that PCC has put before them, never backing down,” said IAM Organizing Director Vinny Addeo. “And now it’s time for justice to be served.”

“I admire these workers for standing together to demand justice and a voice in their workplace,” said District Lodge W24 President and Directing Business Representative Wayne Thompson. “Our District stands ready to meet the challenge of working with the members to win a great first contract that will benefit them, their families, and the community.”

The resilient group has never stopped fighting for the right to representation, holding rallies to bring attention to their cause.

The group of welders voted in favor of joining the IAM following changes implemented after Warren Buffet’s Berkshire Hathaway Inc. purchased the company in 2016. Bringing more fairness in work rules, a safer environment, and better compensation are among the reasons workers chose the IAM.

Workers at the plant make heavy-duty metal components for airplanes, generators, and other industrial products.