Unions: ‘No Stock Buybacks in Aviation Until Problems are Fixed’ 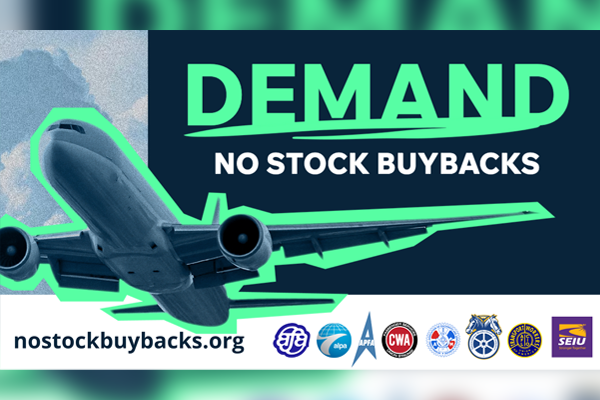 From 2014 through 2019, United, Southwest, American, and Delta rewarded Wall Street with more than $39 billion in combined stock buybacks. That money should have been invested in better passenger experiences, staffing, and good jobs. Early in the pandemic, aviation unions secured a historic relief package, the Payroll Support Program (PSP), to keep workers in their jobs with pay and benefits. It also barred airline executives from utilizing stock manipulation tricks through September 30, 2022.

“We paused the greed in aviation for a little while with legislative constraints tied to COVID relief,” said Sara Nelson, President of the Association of Flight Attendants-CWA, “But the greed that ran rampant before COVID created a system that was already stretched thin with minimum staffing and high overtime hours. We can’t allow executives to send one dime to Wall Street before they fix operational issues and conclude contract negotiations that will ensure pay and benefits keep and attract people to aviation jobs.”

In just the first half of 2022, U.S. airlines have canceled more flights than in all of 2021, disrupting travel for millions of passengers and creating high-stress conditions for aviation workers. Unions are calling for airlines to resolve the ongoing operational chaos by better aligning staffing and scheduling to meet demand and concluding delayed labor contract negotiations.

“ALPA pilots worked with other frontline employees to help keep the aviation industry afloat during the pandemic, and fought to ensure that federal assistance included strong labor protections, specifically prohibiting the use of stock buybacks,” said Capt. Joe DePete, ALPA President. “Through those successful efforts, U.S. carriers and their crewmembers were well positioned for the increased travel demand we are experiencing today. However, some airlines failed to properly plan, resulting in operational issues and increased cancellations causing significant frustrations for passengers and airline employees alike. ALPA encourages airline management to get their operations back on track by investing in their workers before rewarding Wall Street.”

Aviation unions announced the launch of nostockbuybacks.org to accompany the public petition that demands pledges from the CEOs of U.S. airlines. The unions are demanding that airlines pledge to extend the COVID relief ban on stock buybacks until:

“We fought for and won unprecedented relief for airline workers to save the industry for its workers and the flying public, not to line the pockets of Wall Street,” said Richie Johnsen, Air Transport Territory General Vice President for the International Association of Machinists and Aerospace Workers (IAM). “As passengers and airline workers continue to bear the brunt of chronic understaffing, the IAM is ready to help grow this critical workforce to meet the needs of worldwide travel. The IAM stands strong with its airline union allies to fight for every airline worker and traveler.”

“Stock buybacks don’t help families reach their destinations safely or ensure that flights are on time, but airline workers do. Every dollar that goes toward stock buybacks is a dollar that could have been used to reduce disruption by addressing understaffing, high turnover, excess overtime, and low starting wages,” said Richard Honeycutt, Vice President of CWA District 3 and Chair of CWA’s Passenger Service Airline Council. “We’re asking airline executives to show us that providing high-quality service and supporting their workers is more important to them than increasing the wealth of a handful of Wall Street investors.”

“This is a critical moment. Our airlines are returning to profitability, and there is potential to keep growing in that direction,” said Julie Hedrick, National President of the Association of Professional Flight Attendants. “But growth will not happen without proper investment. Passengers and employees have weathered the pandemic and chaotic airline operations. Contract negotiations were put on hold, and workers have been stretched thin. Stock buybacks will only add insult to injury. When we invest in ways that make our passengers excited to return to the sky, stock prices will follow. Let’s not forget that support from aviation Labor Unions stabilized the airline industry, and now we expect substantial investments in the workforce, and our airline’s future.”

“The need for airlines to invest in their operations has never been clearer,” said John Samuelsen, International President of the Transport Workers Union of America. “Any airline that chooses to buy back stock now instead of investing in their workforce would be not only irresponsible but untrustworthy. Airline CEOs need to know that the public is watching and that we won’t stand for their greed.” Anyone interested in supporting the campaign can learn more and sign the petition at nostockbuybacks.org.

“It’s time for the lawlessness of Wall Street to end,” said Sean M. O’Brien, General President of the International Brotherhood of Teamsters. “Millions of passengers and workers are suffering at the hands of corporate bullies who are lining their pockets. We’re not asking; we’re demanding that CEOs get their priorities straight and ensure safe, reliable air travel.”