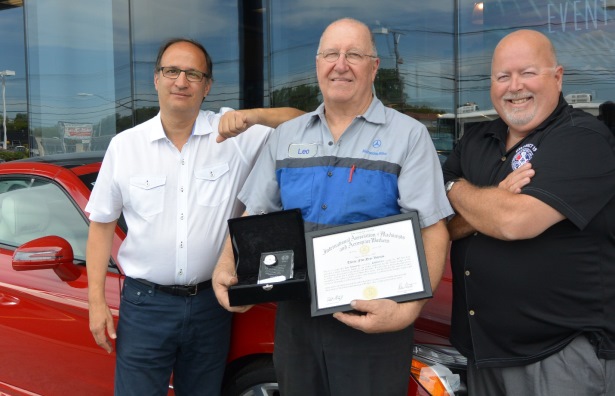 After a 35-year career as an IAM Mechanic at Mercedes-Benz of Buffalo, Local 447 member Leo Shonitsky was ready to roll out his toolbox for the last time.

But the owner of the dealership, Robert LaMastra, and several of his customers had other ideas about his last day on the job. Shonitsky has encountered many customers through the years, many of whom became regular patrons after he established lasting relationships with them.

To many, he’s not just as the guy turning wrenches on their cars. He’s “my mechanic.”

The LaMastra family and Mercedes-Benz hosted a luncheon for Shonitsky. Many of the regulars came in to not only wish him well in his retirement, but honor his dedicated service.

“It was heartening to hear them share their experiences about getting to know and trust Leo,” said Local 447 Business Representative Norman Shreve. “Many of them also gave presentations and gifts to show their appreciation for his work over the years.”

Shreve presented Shonitsky with his 35-year certificate and a memorial clock on behalf of District 15 and Local 447.

“What a fitting tribute to be recognized by the customers and the employer,” said Eastern Territory General Vice President Jimmy Conigliaro, Sr. “It’s a testament to not only the skill, but the professionalism that Brother Shonitsky and IAM members just like him bring to the job every day. We wish him and his wife a long, healthy retirement.”