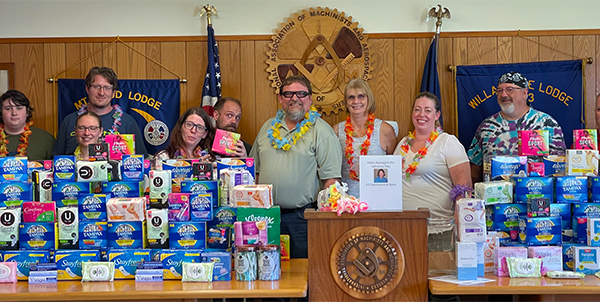 IAM District W24 and its local lodges in the Portland, Oregon area teamed up with the Aphrodite Project to collect feminine hygiene products for members of the community who need them most. With rare exception, their basic needs are often overlooked or avoided as an uncomfortable topic of conversation.

Our union members stepped up and collected $1500 worth of products to be delivered over the next few days to women’s shelters, homeless youth hostels and anywhere there is an unmet need. The project was part of the Maria Santiago Lillis Advocacy Day – A Commitment to Serve (ACTS).

“Sister Maria’s memory is honored by the fine work of the women and men who participated in the noble effort,” said IAM Western Territory General Vice President Gary R. Allen.  “Maria was very proud of the Aphrodite Project and the work they do in the community. A big thank you to all who participated in this honorable effort.”

“It was a great honor to hold an event in honor of Maria, who championed the ideals of empowering women and bringing together communities, while contributing to provide a much-needed service to disadvantaged people,” said Jessica Deming, who founded the Aphrodite Project in 2018.

Sisters Deming and Beth Lacey and Brothers John Kleiboeker and Larry Bickett worked the event, along with members from various shops and district staff. Their effort represents a small step toward empowering the vulnerable members of the community.