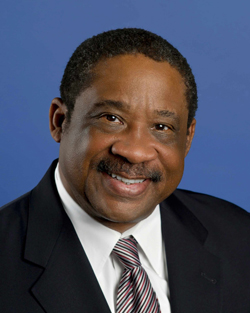 IAM General Secretary-Treasurer Robert Roach Jr., class of 1996, will be honored with the State University of New York (SUNY) Empire State College’s 2015 Distinguished Alumni Award at the college’s celebration of Black History and Alumni Award event on Thursday, May 7, 2015.

“Continuing my education at SUNY Empire State College expanded on the skills I needed to get to where I am today,” said Roach. “The knowledge I gained is with me every day, whether I’m fighting for working families at the bargaining table, testifying on Capitol Hill, or directing finances for one of the largest and most diverse labor organizations in the world. I’m honored to be receiving the 2015 Distinguished Alumni Award from my alma mater, SUNY Empire State College.”

“Robert Roach began a career in organized labor many years ago in the airline industry by standing up for fellow union members at the local level,” said Merodie A. Hancock, president of the college. “In the decades that followed, Robert took on greater responsibilities at the local, regional and national levels. Today he is not only a leader with the national machinists and aerospace workers’ union, but also is highly regarded among organized labor’s leaders across the country. We are proud to have Robert among our most distinguished alumni and pleased to honor him at our event celebrating black history.”

Empire State College is part of the SUNY system, educates more than 20,000 students worldwide at eight international sites, more than 35 locations in the state of New York, online, as well as face to face and through a blend of both, at the associate, bachelor’s and master’s levels.