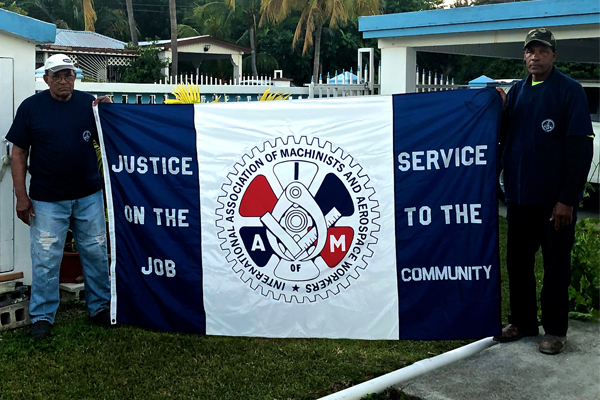 Ramon Murrain Benjamin and Benson Morton, two employees working at what now is Heavy Materials, LLC in the Virgin Islands, a subsidiary of U.S. Concrete, can tell you that being part of the IAM changed their lives. That’s because with the Machinists in their corner, they were able to take their fight to the National Labor Relations Board (NLRB) after being unlawfully laid off and win back wages and benefits totaling more than $250,000.

“This is what comes from being part of the IAM. A company can’t get away with illegally letting go of an employee because they don’t agree with what that person stands for, especially when it comes to wanting to exercise their right to organize and be covered under a union contract,” said IAM Southern Territory General Vice President Rickey Wallace. “Knowing their jobs were at risk, these two men stood up for what they believed in and took a stand. The Machinists Union is proud that we were able to get them a fair fight at the legal level and restore their ability to take care of their families through back wages and reinstatement.”

In 2016, a group of mostly cement truck drivers and heavy equipment operators voted for IAM representation at what was then a company called Spartan Products, LLC. They knew they needed a union contract to protect their rights and give them a voice on the job. But as soon as that happened, the company refused to bargain. Ultimately, Benjamin and Morton were laid off. Southern Territory Grand Lodge Representative Javier Almazan took the lead and brought this to the NLRB to fight for their jobs and to force the company to bargain a contract for all the employees under their care. According to Almazan, it was a long but worthy fight.

“It’s been an arduous struggle with many difficult hurdles to overcome, but due to the resolve and solidarity of these employees, they have been able to overcome all of the company’s attacks,” said Almazan. “The workers remain strong and will continue to fight until their employer comes to the table to negotiate a fair and equitable first contract.”

Unfortunately, this fight is not over as Benjamin was fired, yet again, from the company earlier this month. Once more, the IAM is working with its legal department once more to address this issue and other violations taking place. But the workers now know that when they take a stand, they have the Machinists Union in their corner, ensuring the rights of all workers.

“This company must understand that under the law, employees have the right to organize. And the IAM will always stand ready to make sure that right is fully protected,” said Almazan.