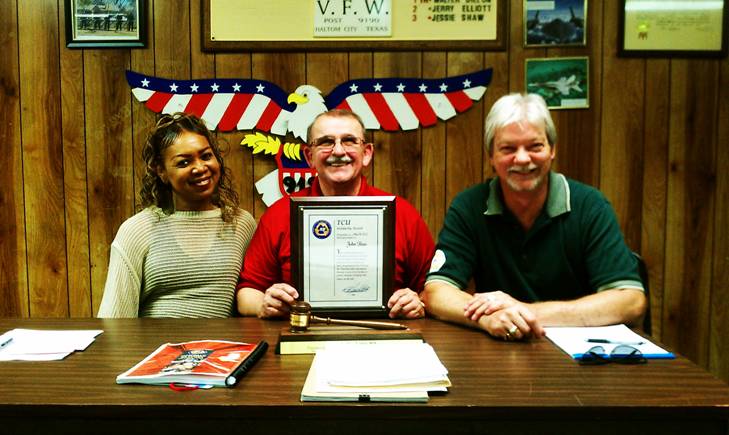 John Ross started with BNSF one cold snowy windy night in February 1971 in St. Joe, MO as an yard clerk. From 1971 to 1988 he worked various jobs from yard clerk to crew hauler and even janitor for a while.

John was forced to Kansas City MO in August 1988 due to force reductions and worked there from 1988 to May 1995 as Relief Chief Clerk. Brother Ross was then transferred to Ft Worth, TX in May 1995 till retirement August 1, 2012.

John was an active TCU Member from the start and begun attending union meetings regularly from July 1995 to the present. He was nominated to fill the remainder of the Vice President Local Lodge 805 position in June 2007, by local chairman Mike Schicker after (then President) Joyce Johnson retired, and took over that position and remained there till July 31, 2012.

Brother Ross was an active President for TCU Local 805 and a strong advocate for the members he represented. He will retire with more than 40 years with TCU and BNSF.

“John has been a strong representative for Lodge 805, his leadership and strength will be missed and we at TCU wish him all the best in his next chapter of life,” said TCU President Bob Scardelletti. “I was proud to see the quick and organized response of everyone at Local 805 in the recent support of our IAM Brothers and Sisters on strike at Lockheed Martin in the Ft. Worth area. Brother Ross was instrumental in making that happen and I would like to extend my thanks.”