The Faces of Outsourcing 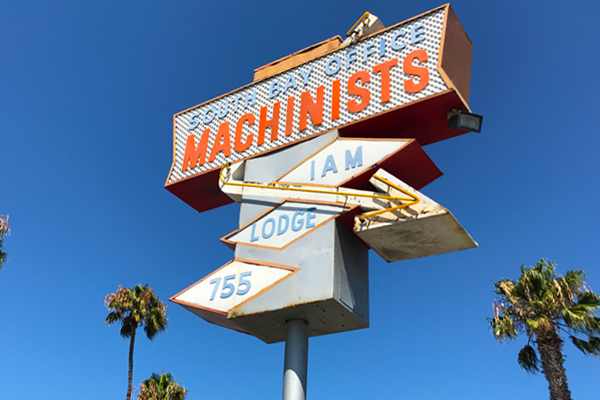 A few miles south of San Diego, in Chula Vista, CA, United Technologies Corporation (UTC) today employs approximately 200 people at its subsidiary, Collins Aerospace. Chula Vista is also home to IAM Local 755, where its members at the plant remember what things were like before UTC took over.

“When I first started in 1976, I believe there were more than 7,000 employees there. They had three shifts going. You couldn’t find parking. You would have to wait there hours just to get parking,” said Local 755 member Carlos Meza. “And at the end of each shift they would have traffic control at every corner, two blocks away from the plant, directing traffic.”

“When I got hired, it went from all the way from E Street to H Street, so the factory was huge,” said 22-year Local 755 member Kimberly Lepper. “And now we’re just one little building.”

Little is left of the Rohr Aircraft Corp. site, which once was a recognizable name in this part of the country. Most of its 67 buildings have been leveled. The vacant land, now earmarked for tourism and hospitality uses, would be unrecognizable to Fred Rohr, the man who founded the company in 1940.

During the early part of World War II, Rohr employed a little more than 50 people to make aircraft bomb sights for the British government. Chula Vista had a population of around 5,000. 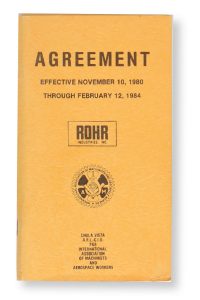 In 1941, the company secured a contract to build B-24 bomber power plant assemblies for Consolidated-Vultee Aircraft Corporation, and with it came jobs. IAM Local 755 negotiated its first collective bargaining agreement with Rohr in October of that
year. The contract included hourly wage rates of $0.96–$1.08 for machinists and $1.12–$1.32 for tool and die makers. The company rapidly became the world’s largest producer of aircraft propulsion units. Rohr had begun to roar.

Production demands of World War II, and additional post-war contracts with companies like Lockheed, Boeing, Grumman, North American and Convair, resulted in employment exceeding 10,000 by the late 1950s. Approximately half
of those workers were Machinists Union members. By the time Rohr reached its peak, 725,000 square feet of manufacturing space stood on 162 acres in Chula Vista, and it employed workers in several other cities across the country.

Fred Rohr’s company grew and adapted to the jet age by designing aircraft nacelles (engine housings), thrust reversers, sound suppressors, airframe components and production machinery that still influence the aerospace industry to this day. Rohr was also an integral part of the local community and economy.

“You saw a lot of people here. You saw people that were your neighbors, or you saw them in the Chula Vista stores and when you were shopping,” said Local 755 member Henry Padilla.

“The company was very family orientated. They would have nights out at Disneyland, everything free. They would close the park down and only let Rohr employees in. And they would have family picnics,” said Meza. “And now it’s nothing. They don’t do anything for you.”

By the time Fred Rohr died in 1968, his company had helped the city grow nearly tenfold. Rohr was sold to BF Goodrich Corporation in 1997, which operated the company until UTC purchased all of BF Goodrich’s holdings in 2012.

It wasn’t long until the Chula Vista location became a target for the company to outsource jobs.

“Goodrich was a people company. They treated the people well. We had good benefits, and they were just an allaround good company,” said laid-off employee and Local 755 member Jesse Perez. “From the first day they took over, UTC basically told us how they felt. We heard from the vice president ‘Why are we building here in California? It’s too expensive. We’re going to be shutting down. We’re going to outsource.’”

UTC is not alone in its strategy to maximize profits by sending more and more work out of the country. In excess of 40,000 aerospace jobs exist today in Mexico alone, to do the work Americans once did. 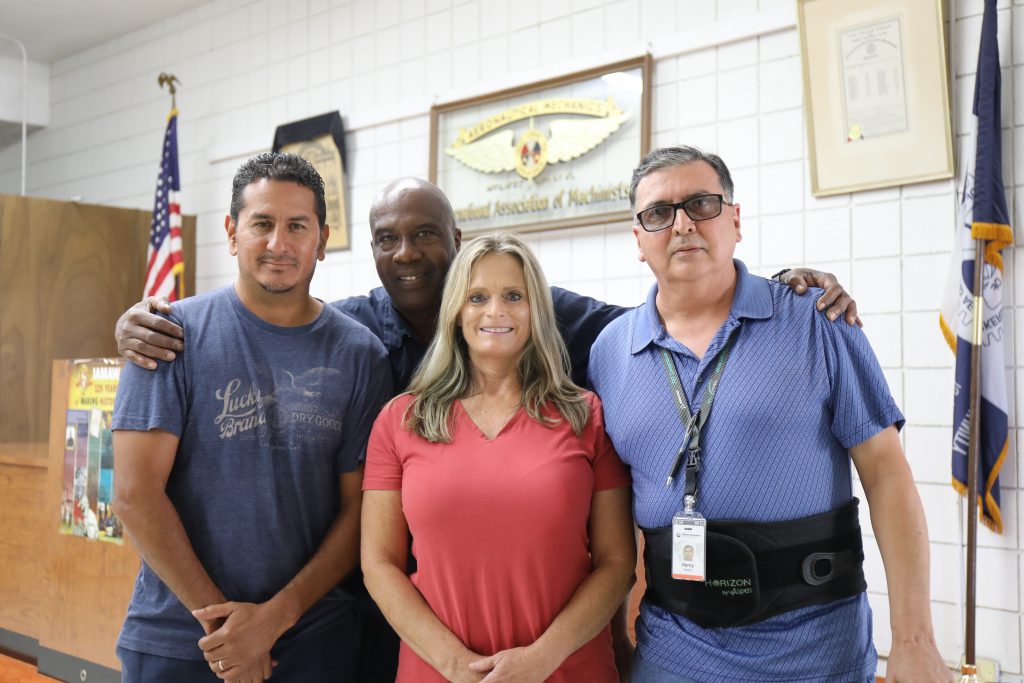 “Nowadays you clock out and go home, knowing that some of these people are no longer working there,” said Gutierrez. “Even with the ones that are working there, the morale is pretty low because you know what’s going on.”

Local 755 member Juan Villalobos had 20 years with BF Goodrich and UTC before he was let go in March 2019. 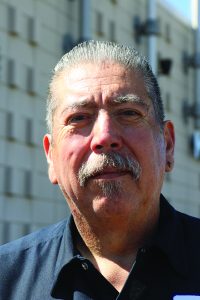 “They’ll go to the cheapest corner of the world to make a profit for their investors, for their shareholders,” said Villalobos. “There workers are getting 118 pesos, which is less than $10 a day. Not an hour, a day.”

Planes flying all over the world include the products Rohr, Bf Goodrich and UTC have made since the 1940s, and they are integral to the commercial aircraft industry. The passengers onboard include the American middle-class workers who made them. Low-wage workers in places like Malaysia and Mexicali, Mexico, cannot afford to fill those seats.

“And guess what? None of these jobs will probably exist here any longer and there’s going to be a lot of unemployment. And they’re going to be asking themselves why that happened,” said Gutierrez. “We’ve got to do something different to change the way we educate our people and do business because corporate greed is going to kill us.”

“When it was Goodrich we had a good plan. Everything ran smoothly. When UTC came in, they just started taking away from us, even our employee bonuses we used to get. They’re here to make money. All they saw were dollar signs.”

The IAM, through tough negotiations with the company, solidified a set time frame for layoffs and secured a healthy severance for those who lost their jobs.

“The union negotiated a closing package which was very good. We got a decent amount of money which helped out for the time that we were on unemployment,” said Perez. “They also negotiated medical benefits for a whole year.”

The members still employed in Chula Vista have fond memories of their years working for Rohr and BF Goodrich, but what the future holds is a cold reality.

“When you’re there for 27 years and they tell you we’re closing. Thanks for coming in all those 27 years. It hurts,” said Gutierrez.

“It’s just heartless. We see the machinery being moved out. It’s pulling at you because this is where you wanted to retire. People don’t give up these jobs, these jobs are hard to find,” said Lepper. “And so, it’s sad to me because I’ve been there for 22 years, I have to start all over.”

“For 33 years, I’ve come to work every single day and I thought to myself, ‘Hey I’ve made good product,’ and now they want to send it overseas just like that,” said Padilla. “We have a lot of knowledge here, knowledge that’s going to be thrown away.”

“I might have a chance to retire from here, I’m hoping with my 40 years,” said Meza. “I’m only 62 now, so I still need a couple of more years to retire. I’m really not sure if I’ll make it those two years.” 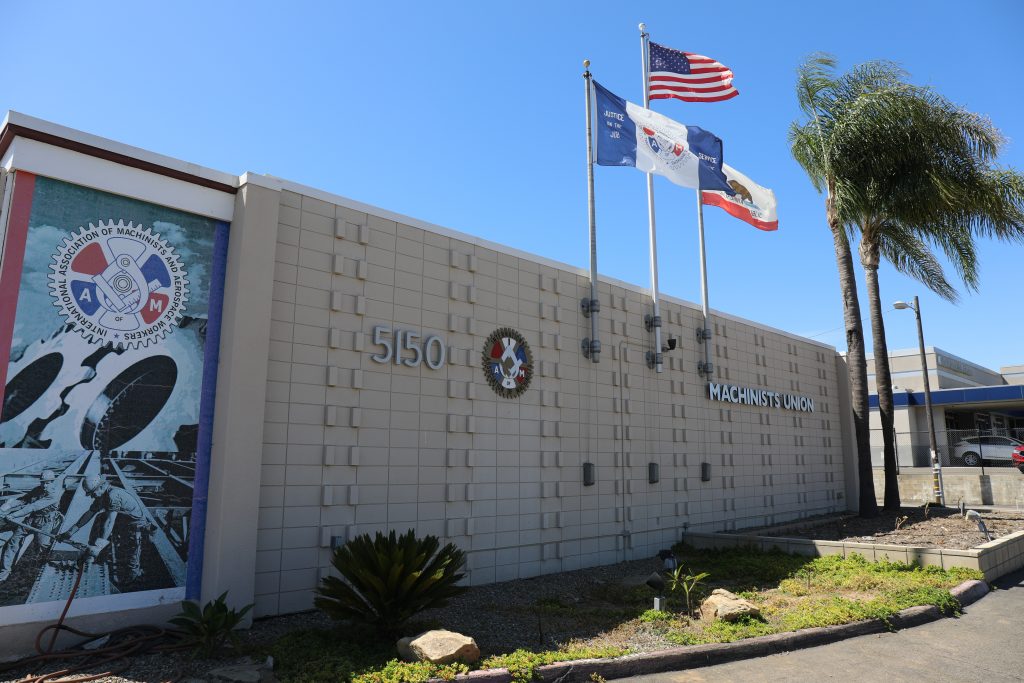