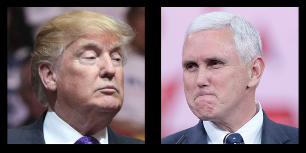 “I will be the greatest jobs president God ever created,” the real estate mogul has said.

That makes his choice for vice president, Indiana Gov. Mike Pence, all the more perplexing.

Pence led state trade missions to China and to Japan and urged legislators to support the Trans-Pacific Partnership (TPP). Throughout his 12 years in Congress he voted for every free-trade agreement that came before him, including CAFTA, and agreements with Colombia, South Korea, Peru, Chile, Oman and Singapore.

Trump has made opposition to such trade deals the centerpiece of his campaign.

In Indiana, Pence signed into law limits on minimum wage hikes, sick leave expansion and other benefits. He also defended the state’s right-to-work (for less) laws enacted by his predecessor. He has a three percent lifetime pro-retiree score from the Alliance for Retired Americans.