Where We Go One, We Go All

What do cake mixes, 50 pillows, bowling pins, kids’ winter coats, turkey dinners and school backpacks add up to? 1726. East Boston IAM Local 1726, that is. These are just a few of the things its members use in their ongoing effort to help others.

“We’re an organization that cares about the community,” said Local 1726 President Mike Bucci. “It’s our responsibility to help out where we can.”

Bucci’s local includes members employed by a number of different airlines at Boston’s Logan International Airport. Many of them have little opportunity to interact at work, so community service became their connection. 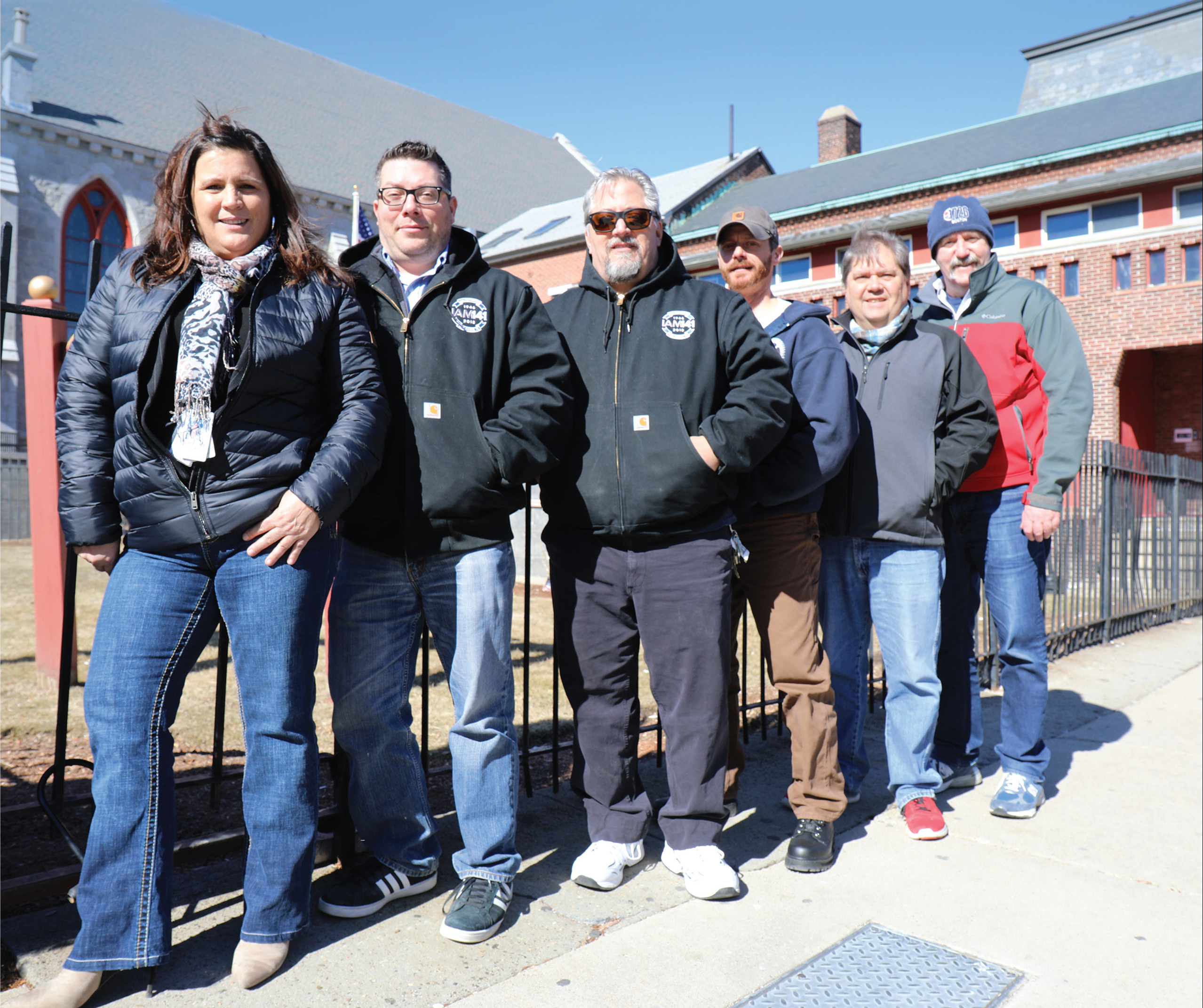 “It brings everybody together with that camaraderie as a group,” said Bucci. “We can do more for others when we’re joined together. And I guess that’s really the idea of a union, right?”

In 2015 the local did not have any established community service program, but leadership had a desire to do something. For its first fundraiser, Local 1726 decided to hold an event for Guide Dogs of America. Local 1726 Committee Member Cristina Odoardi was given the responsibility to make something happen, and someone suggested a golf tournament.

“I’m like, ‘I don’t know anything about golf. How can I do a golf event? I work customer service and we don’t have that many golfers in our group’,” said Odoardi. “I said, ‘how about bowling?’”

Odoardi sat down with Bucci, Local 1726 Financial Secretary Bob Bennett, Recording Secretary Nick Parker and Committee Member Roberto Di Rice and came up with a bowling fundraiser. “Pins for Pups,” named by Di Rice, turned out to be a big success and raised roughly $5,000. Members and the general public alike talked about the event in the weeks that followed, and asked when they could do it again.

“For 30 years I’ve been involved with community service in one way or another, whether it was through my daughter’s school or on my own,” said Di Rice. “I thought this would be a great platform and it has been. Our membership is really giving and gracious.” 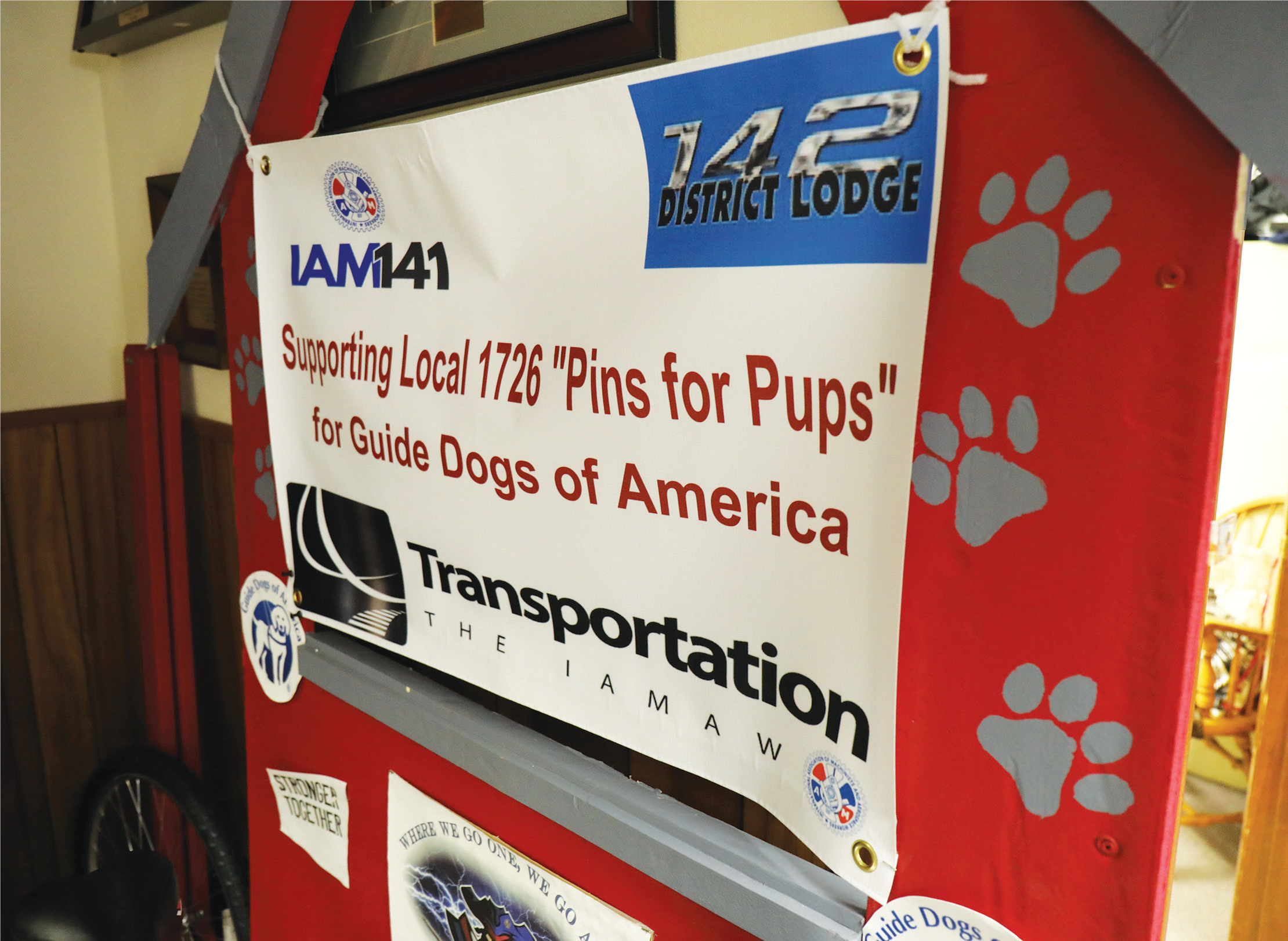 This June the local will hold its fourth “Pins for Pups” event, hoping to raise more than $10,000 for the charity. Local 1726 Committee Member Firman Jensen attended the first “Pins for Pups” and has been involved with it and other events ever since.

“I’m a sucker for dogs so anything to do with helping to provide somebody greater stability or greater mobility in life is a big win for me,” said Jensen. “It just gets bigger and bigger every year, which is great.”

Along with fundraising work for GDA, the local also developed a close relationship with Crossroads Family Shelter in East Boston.

“I have a huge role in connecting donors and volunteers with the organization,” said Shakira Floyd, Crossroads Family Shelter Development Associate. “I have a very good relationship with the IAM, and with Bob [Di Rice]. We have 15 families that live in our congregate building and we have 12 families that live in scattered apartments we rent on their behalf throughout East Boston.”

The shelter houses many children, and celebrating their birthdays has become somewhat of a cause for the local. All it takes is a call from Floyd with the age and gender of a child, and the IAM puts together a “birthday in a box” for the family, sometimes with only a day’s notice.

“The boxes include supplies to essentially throw a little birthday party for the children,” said Crossroads Family Shelter Executive Director Lauren Antonelli. “There’s cake mix and all the supplies to make a cake, the pan, candles, usually some balloons and other types of party supplies, as well as a little birthday gift for the kids.”

Although the birthday boxes are for the shelter’s kids, they also provide something for the volunteers who put them together. 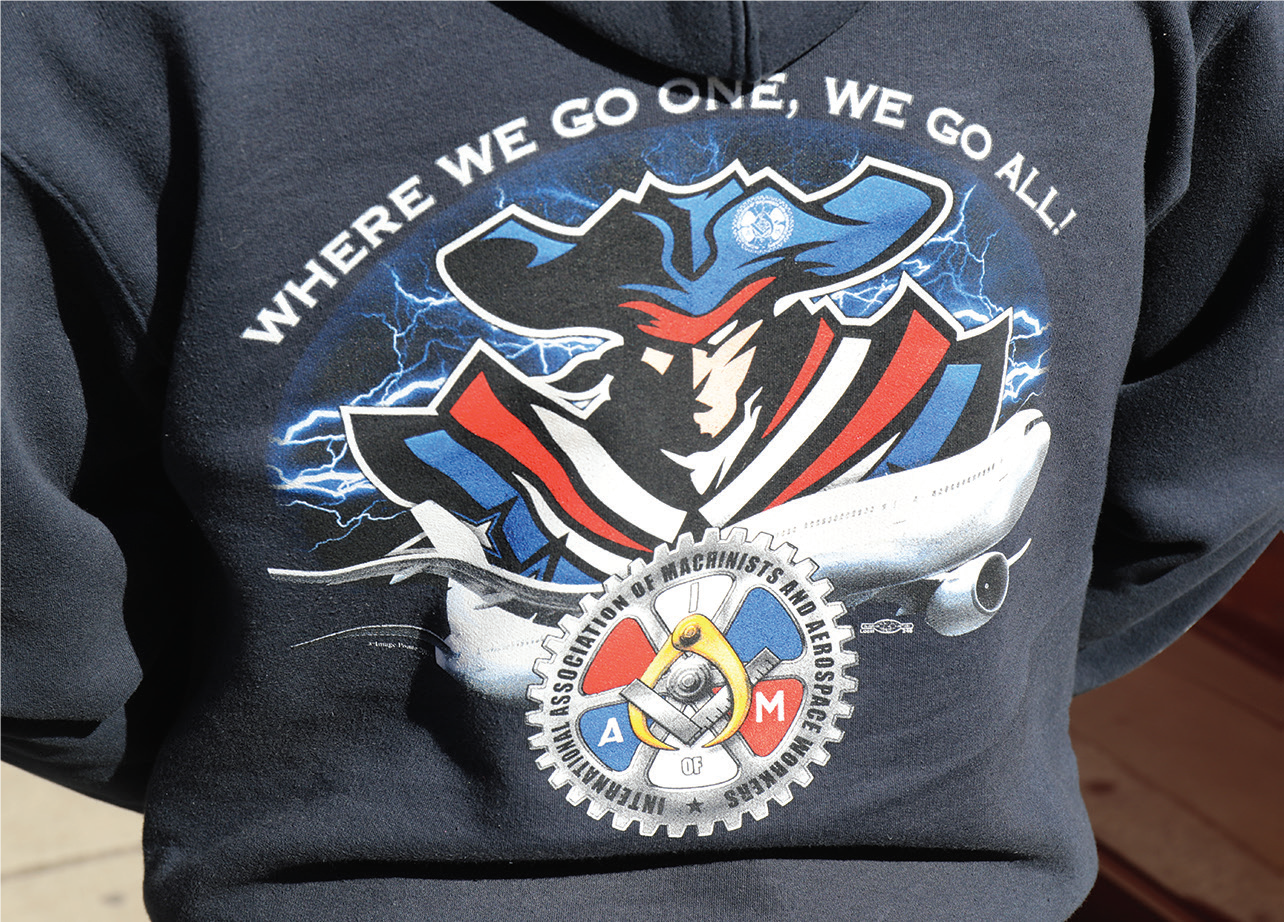 “Seeing the joy and the children’s faces, it’s a priceless thing. And it kind of brings everyone together,” said Bucci. “It’s something that everybody can be involved in. Not only does it do something for the community, it actually does something I believe internally for us as an organization.”

Local 1726 has become the shelter’s most reliable source for donated items and volunteers.

“They’re always there for us. For example, around Thanksgiving they help provide turkeys when we host a really large turkey drive for the community,” said Antonelli. “Any parties we’ve done and back-to-school events they’ve come to, and other holiday events. We can absolutely rely on them at any time.”

It didn’t take long for 1726’s members to realize that, through a team effort, giving of their time wasn’t always a requirement to assist. When the shelter needed winter coats for some of the children, a call went out with the genders and sizes. Members promptly went out and found what they needed.

“There are some people involved now who were absolutely not involved with the local or the union at all before the community service program started,” said Local 1726 Financial Secretary Bob Bennett. “It kind of draws people in. It actually shows them what their union is doing in the community, as well as in the workforce. And it has a very positive effect.”

Additionally, in the fall the local supplies backpacks, paper and other items to make it easier for kids living at the shelter to begin a new school year. Some items are purchased, but many are collected from homes and offices.

“In the past three years since we’ve been doing the community service more actively within the local, there’s been a lot more participation,” said Di Rice. “I don’t have to think twice if I put up a sign or something on the Facebook page about a need that we have. I expect an immediate response.”

The local lodge’s involvement in East Boston reflects the Machinists Union philosophy of service to others.

“Community outreach is an important part of the IAM,” said IAM Transportation Vice President Sito Pantoja. “I couldn’t be more proud of Local 1726 and all our Transportation locals that give their time and resources to help those in need.” 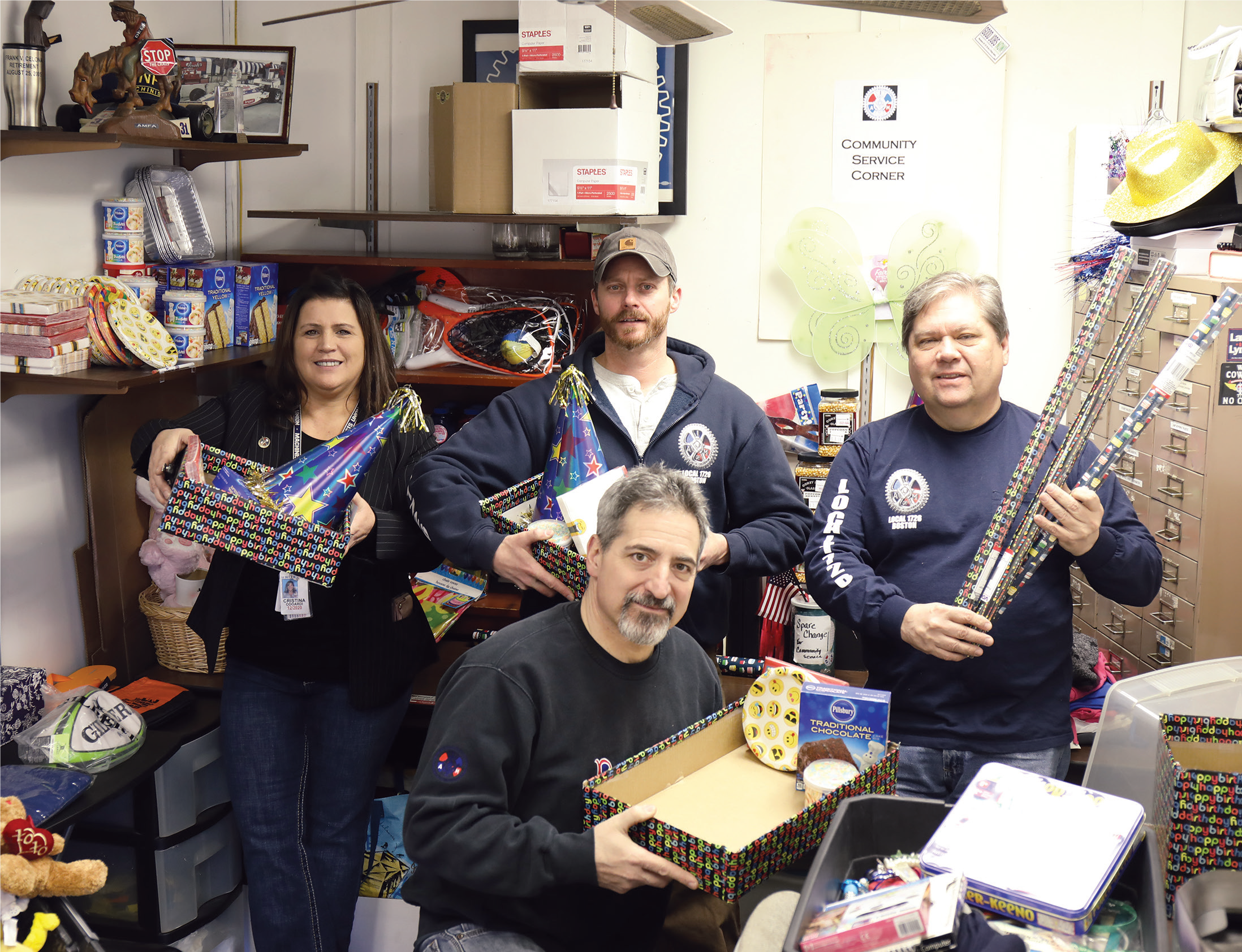 Even employers have chipped in. When United Airlines changed the type of pillows it used for its first-class service to San Francisco, the Boston station was left with more than 50 pillows it could no longer use. Rather than throwing them away, Di Rice asked if the local could use them.

“They were free and they were brand new, right?” said Odoardi. “And we have a homeless shelter. I’m sure we can do something with them.”

They were not standard size pillows however, and needed cases. So off they went to shop for fabric, preferably with clouds or airplanes on it. They cut the material to size and Di Rice stitched them into cases.

“We started with nothing and made something that was really special to people,” said Di Rice. “When they end up in the shelter, the first thing that makes them feel comfortable is bedding or a pillow. They can rest their head and feel like they belong someplace.”

One member regularly brings clothing and other items from her closet to the local lodge, something she would not have thought of before. Another member saw what was being done for the shelter, and asked if something could be done for a drug rehabilitation center one of her relatives was in. Local 1726 started by providing pizzas for one of its graduations.

“Sometimes you step back and the people around you really excel,” said Bucci. “They come out of the shadows and all of a sudden they become leaders.

It’s clear that the IAM slogan “Justice on the Job, Service to the Community” is deeply rooted in East Boston.

“We make union wages, livable wages that a lot of people don’t make. And it gives us an opportunity to give back to those that are a little bit less fortunate than us,” said Jensen. “It’s just a way to bring everybody together and show them and their kids who are entering the workforce, that unions aren’t the big bad guy.”

“It doesn’t stop with us, it starts with us,” said Odoardi. “All we’re doing is giving everybody that little nudge to get them going.”