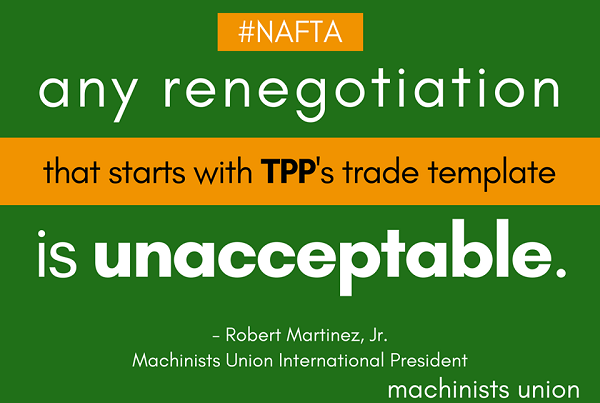 The renegotiation of NAFTA begins this week.

“Renegotiation of NAFTA represents an opportunity to get trade policy right,” said IAM International President Bob Martinez. “While we are heartened, that after all of these years, NAFTA will be renegotiated, we urge U.S. negotiators to insist on a NAFTA that will benefit workers in all three countries. Negotiations must achieve dramatic  improvements in enforceable labor standards, stronger rules of origin, elimination of private rights of action for companies and significant improvements in many other chapters.  Replacing NAFTA with the highly flawed TPP is unacceptable.” The IAM included all of these suggestions in its formal submission to the USTR earlier this summer.

Renegotiation of NAFTA Cannot Be TPP 2.0