Biden-Harris Administration Policies Having a Positive Impact on Workers’ Lives 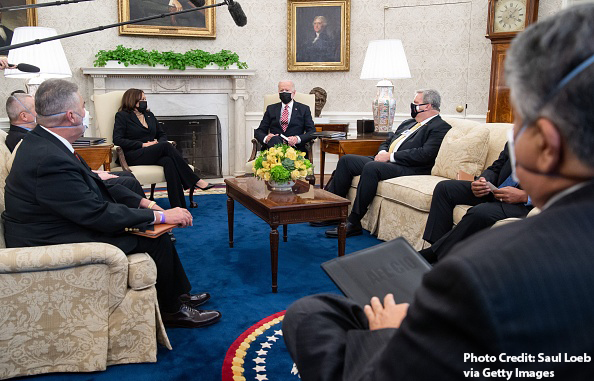 The Machinists Union is giving high marks for the Biden-Harris administration’s one-year anniversary in office, which has included the passage of pro-worker, pro-democracy legislation that supports and grows the labor movement.

“The Biden-Harris administration’s policies are good for working families, including IAM members who have benefited from the actions of this administration,” said IAM International President Robert Martinez Jr. “When I met with the administration at the beginning of their term, I advocated for investment in infrastructure that will benefit American workers and communities. President Biden kept his promise to strengthen Buy American laws and support extending much-needed economic relief to all workers, including our members in the airlines, manufacturing and transportation industries. The IAM looks forward to continuing to work with the Biden-Harris administration to move the pro-worker, pro-democracy agenda.”

Highlights of the Biden-Harris administration’s first year in office include:

Passage of the Infrastructure Investment and Jobs Act, a $1 trillion bipartisan bill that will create good union jobs in manufacturing, automotive, transit, and many more industries.

Appointed pro-union, pro-worker National Labor Relations Board members and is reviewing and overturning anti-worker rulings from the previous administration’s NLRB.

Nominated pro-union lawyers to lead the National Labor Relations Board.

Fighting for passage of the Protecting the Right to Organize (PRO) Act, Build Back Better and voting rights legislation.