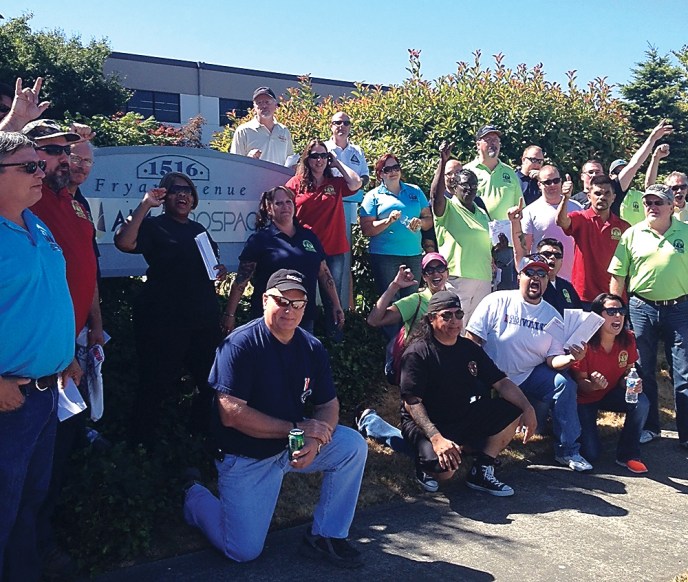 IAM District 751 organizing volunteers outside the AIM Aerospace plant in Sumner, WA, the day before AIM workers voted to join the Machinists Union.

Workers at AIM Aerospace, Inc., in Sumner, WA, have voted to join the Machinists Union. The more than 250 aerospace workers gave a thumbs up to the IAM by a 3-to-2 margin.

AIM is a tier-one supplier to the Boeing Co. and Airbus. It also provides components to major aerospace suppliers like Spirit AeroSystems. The company directly competes with Triumph Composites in Spokane, WA, which is also an IAM-represented aerospace company.

“The biggest congratulations go to the workers at AIM,” said IAM District 751 President Tom Wroblewski. “They stood up for themselves, and stood together in the face of a pretty vicious anti-union attack by management. This strong show of solidarity right at the start is a very good sign, and I’m optimistic about the future for our new brothers and sisters.”

Wroblewski also thanked the union staff and volunteers, who spent several months working on the unionizing effort, and Organizer Loren Guzzone, for leading his first successful organizing campaign as a member of the District 751 staff.

“Congratulations to everyone involved in this campaign, especially the workers of AIM,” said IAM Western Territory General Vice President Gary Allen. “The Machinists Union is proud to stand with the workers of AIM and provide them with the representation they deserve.”